According to today's New York Times, the J. Paul Getty Museum in Los Angeles has just acquired a Manet, which will be exhibited as of December 13.  The Getty's senior curator of paintings, Scott Schaefer, said that he "really wanted a Manet that showed his Spanish influence."

But this isn't just any Manet. It's likely to be a painting that you have not seen before.  The portrait was rejected by its sitter, who, the Times notes, left the artist's studio in tears at the unveiling, and never saw the painting again.  Manet kept it until his death, and it changed hands a few times until the Getty was able to buy it.  Let's take a look at "Madame Brunet," painted between 1860-3, and re-worked again in 1867: 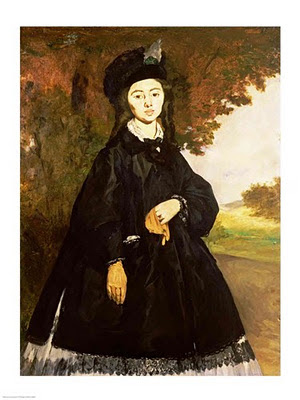 This is not a flattering portrait.  Madame Brunet is honest, open, seemingly unafraid. But she must have misunderstood Manet's work. He was not likely to lie.  Her face is right here.  The leaves in the background, at least in reproduction, seem as if they belong in another painting ... (perhaps, if we think about the essays about Manet's work on the site called "Every Painter Paints Himself," she is standing in front of a backdrop, here repainted faithfully) ... quite distant from her sophisticated pose.  The shimmering black paint is reminiscent of Velazquez or Goya. The gaze is also derived, perhaps from the Spanish. Here is a similar gaze, Goya's "Woman in Black": 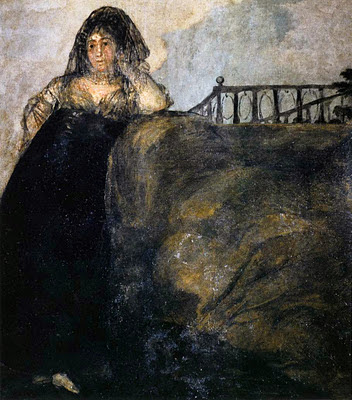 The brushwork is looser in the Goya, the woman is a bit more seductive, but certainly the play of darks and lights and the artificial setting are very similar ... and yet ... what is Manet really thinking of?

Well, perhaps another painting, also completed in 1863, a painting rather more well-known, "Luncheon on the Grass": 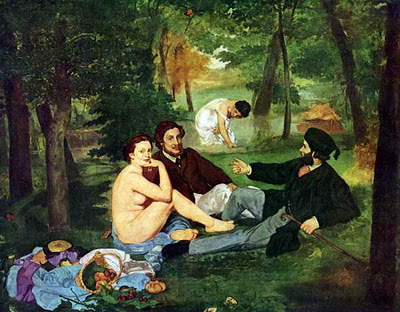 If we look at the face of the model who is looking, fully un-clothed, at us, we can see some resemblances to Madame Brunet. The two faces seem quite similar, to me.  I suspect that Victorine Meurent, Manet's model for this, and "Olympia," and so many other paintings, was used to being painted without any gauzy effects.

I think that Manet was thinking about Meurent while he was painting Madame.
at December 02, 2011