"Surface is Illusion, But So is Depth," says David Hockney: A Face by Rossetti, a Face by Manet

David Hockney recorded a film called “A Day on the Grand Canal with the Emperor of China, or Surface is Illusion, But So is Depth”; it is from 1988 and is only available now on VHS, which is really a shame (there is a post about the scroll at hardcorepainting.blogspot.com, however). I think Hockney’s comments in this interview reveal the ways we see.  And they may also reveal the ways we should be thinking about creating new art.
The film is a running commentary on two scrolls; the first dates from 1689, before Chinese artists were exposed to Western perspective, and the second is from 1770, and has become … almost Western.  Hockney examines the first scroll, which he clearly prefers; it is 27” high and about 72’ long, and the figures depicted are an inch high at most.  The artist depicted an Emperor’s journey in a barge down a river and the anticipatory activity (people are running… “he’s coming!”); we can look towards the villages expecting him.  Hockney unrolls the work, and says that “you can decide where to look … we can move down this street, at this angle … [it is an] intimate view” of life in the “back streets.”  And it is splendid to watch: we see cooking, people raising chickens, people lining up for the Emperor.  As the scroll opens, we can control its edges, we can move forward or back, we can even see over walls. Hockney contrasts this with a Canaletto, which is, he says, is too aware of walls, and boundaries, and a Canaletto view of Venice, say, is “a kind of window,” and so “a wall” is “an appropriate place to put it.” In the Western way that we see, we think too often of the camera, which is, Hockney says, “outside” of the depicted space; the first scroll is “inside.”  You are not looking “through” at anything. You are able to very nearly see around things, as if you were moving in the landscape. The first scroll shows you two sides of houses, as if you were approaching from either side. The figures do not grow smaller as they grow distant.  Mist separates jumps in time. “There is always movement, linkage” and there is, continues Hockney, “an incredible shimmer of life.”  But then Hockney show us that in the second scroll, the landscape recedes, figures seem stiff, isolated, posed.  I think this may also be the place where Hockney says that “when you stop moving, you die.”
Keep this in mind as you look at these two portraits. I saw the face at left this week, (at the show “The Cult of Beauty: The Victorian Avant-Garde” exhibited at the Legion of Honor in San Francisco), Dante Gabriel Rossetti’s “Bocca Bacaciata: The Kissed Mouth,” from 1859, and on the right, we see Eduard Manet’s “The Railway,” from 1872-3: 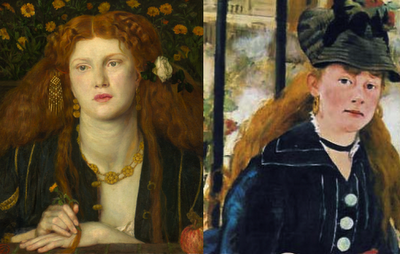 There is a small problem of dates here, of course, and we’ll take a minute to acknowledge our poetic license. Manet and the Impressionists were, for Rossetti and friends, precursors, painters to react against, and yet this painting of Manet’s was completed at a later date than Rossetti’s. But the two faces are hauntingly similar, and so I am asking for a bit of Keatsian “negative capability” here. And that’s actually rather appropriate, since Rossetti’s poetry was heavily influenced by Keats. Rossetti and the Pre-Raphaelite circle were reacting to the Impressionists (as well as anyone from Raphael, forward) because, as Rossetti apparently wrote himself in the journal “The Germ,” artists of their time needed “an entire adherence to the simplicity of nature.”  The landscapes must be real, the bodies must be real.
Okay. Now come back to Hockney for just a moment.  What is “real”?  Is it the one-inch Emperor, and his freely-painted back streets, open to any angle?  Or is it the more scientific, but rather stilted, world of the second scroll, with its boundaries like a window-frame or the view-finder of a camera?
Rossetti’s painting, seen “live,” is astonishingly small (12 5/8” x 10 5/8”).  Still, it is compelling. Rossetti’s model here was Fanny Cornforth, who would later become his second wife. “The Kissed Mouth” seems photographically realistic; there are perfect shadows and wrinkles at the neck, stray hairs, a face trapped in a too-small space, no lush eyelashes, and no direct gaze. The woman here almost retreats into the wallpaper; the flowers in her necklace echo those on the wall. She is still. The illusion is perfect; there are several figure painters working in this mode today. Rossetti and his group believed that Raphael, the Mannerists and the Impressionists had prescribed far too much about the ideal body, its dimensions, the spaces it must inhabit in a painting, the light, the way one pigment reacts to another … and so we are here looking at a painting which is very nearly … a photograph.  She belongs, I would say, to the world of Hockney’s second scroll.  The “depth” here is certainly illusion, and a good one. This woman is reflecting, we think, and we almost don’t want to bother her by looking too deeply at her.
Manet’s painting was not placed with the Impressionists at their show that spring of 1874, but instead was exhibited at the Paris Salon.  It was not well-received, as historian Isabelle Dervaux tells us: "Visitors and critics found its subject baffling, its composition incoherent, and its execution sketchy.”  Here is the full painting: 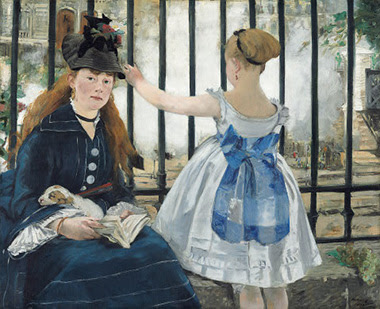 And there is a really fine interpretation of Manet’s probable intent at the blog “Every Painter Paints Himself,” dated 13 January 2011, by Simon Abrahams, where he says that “the artist’s alter ego” is “constructing the very scene we are looking at, fusing the activity in the studio with that of the scene itself.”  You will need to read the full essay, I think, to see why he argues this; do read it].
Manet’s model for the woman gazing at us was Victorine Meurent, who gazes out at us, as she does in “Le Dejeuner sur l’Herbe” and “Olympia.” But here, she is even less fully drawn-in.  She is very much in the world, yet she remains mysterious; the tilt of her head suggests she may be about to move.  And that uncertainty is what keeps us looking.  A critic, Tim Lubbock, wrote that  “Manet's magic is not to insist on finding the eternal in the contemporary. It’s just a subliminal resonance”  (Friday 18 April, 2008, in The Independent, online).  Lubbock wasn’t talking about Rossetti’s principles, which could be described as “finding the eternal in the contemporary,” nor was he talking about Hockney’s discussion of that first Chinese scroll.  And yet … as artists, don’t we want “subliminal resonance”?  the “illusion” of the “surface”?
I find myself liking the way the eye moves around the face in the Manet painting. I find I like that reference to the surface of things.  I think that’s what art needs to be: self-referential, reminding us that it is, after all, “surface.”
at March 18, 2012 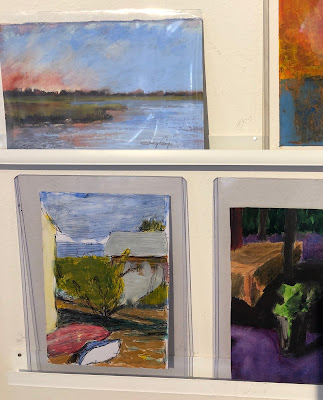