Pablo Picasso, Michael Rich, and the Sense of Intimate Space

One Painting by Picasso, to start
I am reading T.J. Clark’s Picasso and Truth, based on the Mellon lectures he gave at the National Gallery of Art in 2009.  Clark wants to move his audience away from the “abominable character of most writing on [Picasso] .... this second-rate celebrity literature” based on a kind of “prurience” (Picasso and Truth, Princeton University Press, 2013, p.4).  Clark continues to say that, if we did look at the work itself with any care, if we did, we would know that...

Fixing on a Picasso painting at all directly -- not swiveling away to this or that fact of the love life or cult of personality -- and asking the question ‘What understanding of the person and situation depicted seems to be at stake here?’ most often leads to places we would rather not go (5).
So let’s go there.  Clark begins by analyzing Picasso’s “The Blue Room” (also known as “The Tub”) from 1901: 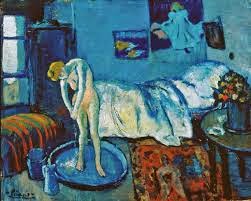 There are few paintings, I feel, more full of care and regret. The blue here is dominant without being portentous. Likewise the scale of the body in relation to the room  -- small enough for a hint of fragility -- and its placement quietly off center. And there is the inimitable drawing of the young woman .... Few painters have had more of a sense ... of how easily the human body might be destroyed .... Tenderness is everywhere .... [and surely, Clark continues then] the tenderness and definitiveness in Picasso has to do with a vision of space .... Space is intimate. The rug heads off abruptly into infinity, but the sheet on the unmade bed laps over it and leaps toward us and asks to be touched. Nothing important is far away. Space, if I can put it like this, is belonging ... something desired, vulnerable, patiently constructed, easily lost.  (26-7)

How perfect a discussion of a painting is this? and what a poetic description of the idea of space!  And Clark cautions that this isn’t really a full analysis; it is merely an introduction to his idea of Picasso and the space(s) he paints. We look back at the painting with a new sense of discovery. So, I say, let’s go with the idea of space, and tenderness. Let’s take Clark at his word, and look at a contemporary painter -- using his approach.

Turning To Michael Rich, at Adler&Co.Gallery (San Francisco)
When we walked into Art Market San Francisco, we fell immediately into the paintings of Michael Rich. Jim Adler spoke to us about the artist, who had been painting landscapes on a grand scale, the perspective my husband often calls “views from an airplane.”  The artist wrote that, in those works,

Spaces of color and light akin to the mountains and seas of my travels open up between tectonic plates of color and form .... the broad sweeping vistas of the Italian countryside or the New England shore ... [but now, Rich has changed focus to a much smaller patch of land,] my own backyard and garden ... [I am] looking more closely at the intimate forms of leaves, branches and lines in nature .... drawn lines of remembered and invented forms find their way from direct drawing observations to the abstract world of paint on canvas (www.michael-rich.com)

There is something about these paintings that feels like a discovery, as if we are heading towards a small garden doorway into a mass of color, flowers blowing scent on the breeze. Here is “Untitled, 2012” (all photos courtesy of Adler&Co): 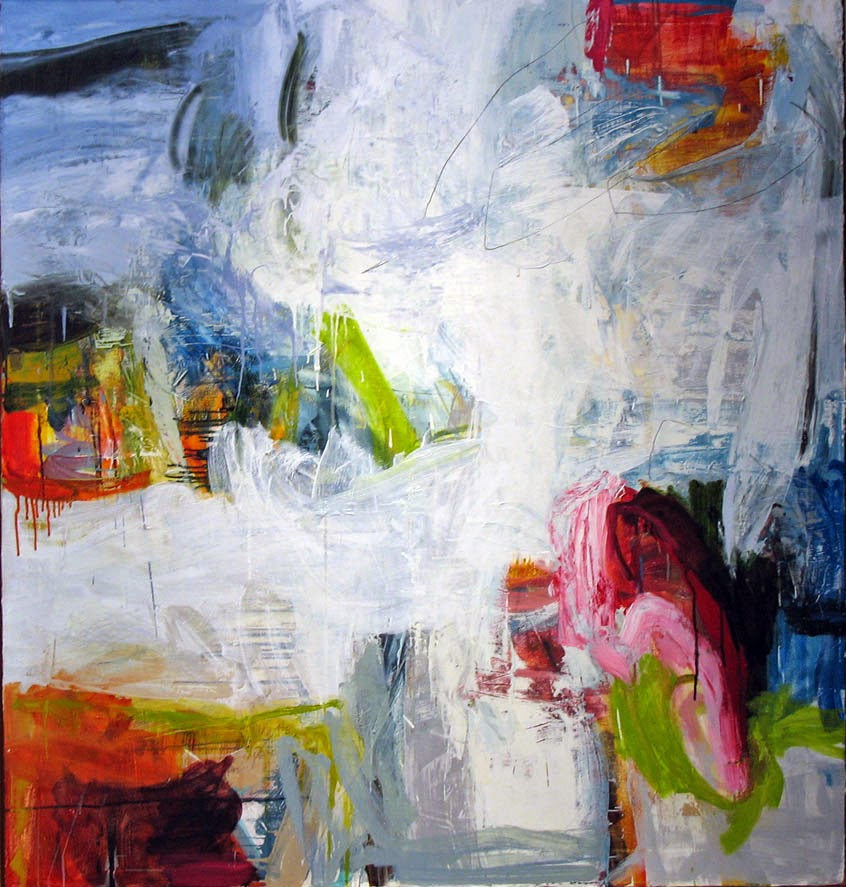 This is moving in the direction of the small, the personal. The scratches and drips and layering of the pinks, oranges, greens, blues are alive because the painter’s touch is so very evident. Look at the soft, deep horizontal green marks (near the deep gray horizontal brush mark) in the upper left. These greens could be stems, but, because this is an abstract painting, they also can function like the shadows one sees passing over a flowering bush on a summer day. The fact that this work is abstract means that there is room for the viewer to enter and see ... as much as we can, for as long as we remain in front of the work.

Rich handles color with great ease and depth. I often find that white paint can function as a dead layer, so opaque, so stifling, that it can nearly kill a corner of a painting. And yet here, the white lifts the painting, is light as air, actually seems to bring more space into the work. Look at this close-up of the “busiest” part of this canvas: 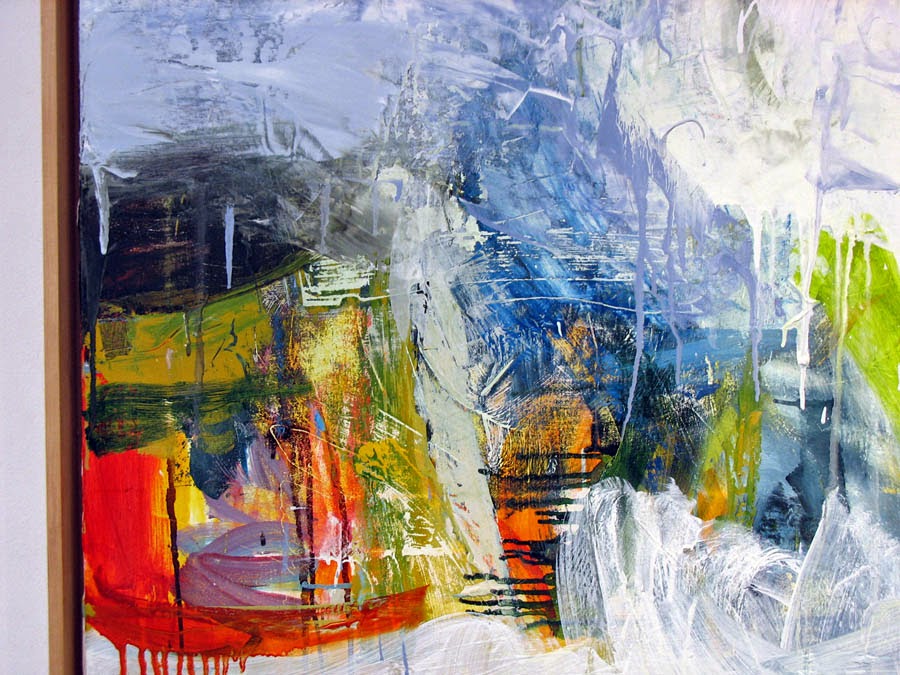 Rich still paints immense works (this painting is 54” x 50”). Let’s go back to Clark’s question, the one that few have bothered to ask about Picasso, “What understanding of the person and situation depicted seems to be at stake here?”

I would say the understanding is that this painter is familiar with this space, and happy within it,  and the situation is fresh: these paintings offer the calming, yet uplifting, feel of an interior dream life.  Clark had written about Picasso that “Space, if I can put it like this, is belonging ... something desired, vulnerable, patiently constructed, easily lost.”  And I’d like to think about that, here. The other large work on show was “Canyons of Rain,” (68” x 62”): 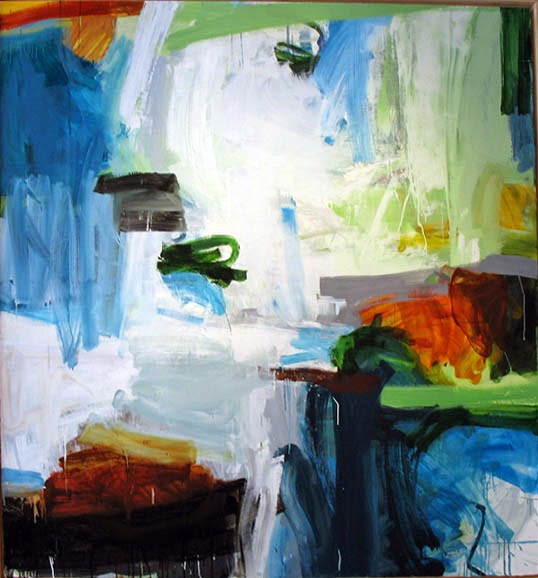 This painting seems to have taken the direction of “Untitled, 2012,” even further. There are fewer small marks and more overall transparent layers, which, again, amazingly give the painting air.  It is a space of “belonging.”  I often think that all we want, really, is to belong in the space that surrounds us.

Thanks to T.J. Clark, Jim Adler and, of course, Michael Rich. There is news about "The Blue Room"; a painting has been discovered underneath by the curators at the Phillips Collection: http://news.artnet.com/art-world/hidden-portrait-discovered-beneath-the-surface-of-picasso-painting

Email ThisBlogThis!Share to TwitterShare to FacebookShare to Pinterest
Labels: Adler&Co, Michael Rich, painting and space, personal painting, picasso, the cult of personality, the painter's touch, the room and the garden, white paint as transparent