Creating a moment in time....

The artist Hiroshige printed a series "One Hundred Famous Views of Edo."  The editors of a book of these plates, Melanie Trede and Lorenz Bichler, discuss features of these prints that influenced Western artists, from Van Gogh and Whistler (and, in her current New York show, Helen Frankenthaler). One of Hiroshige's trademarks is the object along a left or right margin of the work, shown in part and closer to the viewer. This larger, partial object is called a repoussoir. The editors say that the scholar Henry D. Smith called the use of this technique "proto-filmic," because the cropped object brings in the idea of time... we must be, or the object must be, moving through time in order for us to see it in this state. Here is the example from the book: 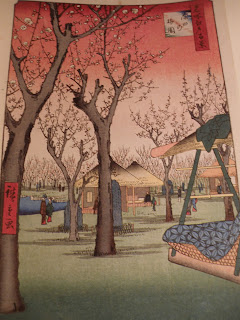 The editors note that the person being carried has just left his sedan chair (the object to the right) and is now moving through the landscape. This seems to me to be an idea that leads directly to abstraction; the painter is not painting an object in order to capture it, in all its dimensions, but rather to say something about the moment of looking.  I have never thought of this marginal hovering, exactly, as a way of portraying movement. Here's a photo with a large-ish object on the right-hand side: 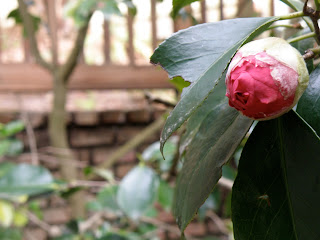 A new camellia blossom... not moving.  Let's crop it and try again: 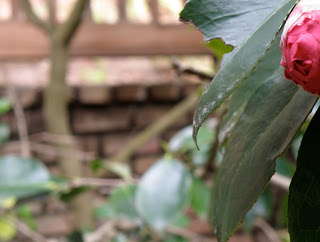 Maybe it's just the juxtaposition of the two photographs, but this looks like movement to me!
at March 19, 2011