A sketch for the nest and cottage series....

Taking yesterday's beginnings, sketching something to try tomorrow, thinking of the final stanza of my new favorite Wallace Stevens poem, "Final Soliloquy of the Interior Paramour," which is

"Out of this same light, out of the central mind,

We make a dwelling in the evening air,
In which being there together is enough."
The ideas of light, of making, of together, of air and having two as one... here is the newest drawing, crossing picking up rocks on east Beach at Watch Hill with a stay at Pacific Grove, East and West coasts: 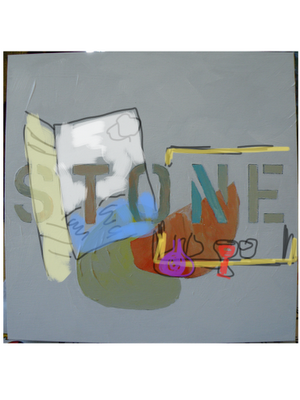 "One approaches, simply, the reality /Of the other eye" wrote Wallace Stevens, in "The Bouquet"

My husband has been writing tanka-prose, and was inspired by the same letter as I was (see 8/28/11 post) to write this new piece:

The cottage with its thatched roof, made me think of a wren’s nest.
—Vincent Van Gogh

What if you were wandering through a second-hand shop in the center of the City,
and you found an old fashioned Holmes stereoscope, its lenses cloudy and the varnish
peeling from the wooden shaft. And what if there were a shoebox filled with old-
fashioned stereo photo cards that went with it, and you bought the lot and took them
home. When you looked more closely, later, you discovered that the cards were all very
odd; instead of the same windmills or smiling field laborers repeated left and right,
there were entirely different pictures on each side of every card—say, for example, a
cottage on the left and a bird’s nest on the right. When you looked through the viewer,
what might you see?

the poet sees
with both eyes wide open

the painter’s vision
travels at the speed of light

in reds and yellows
crash into flowers

Card 53-4, Underwood & Underwood—Cape Cod, Provincetown in winter, snow curling
away from the plow. Ice mounds built by the recurring sea’s surges block Dickensian
strugglers in top hats in frozen progress. On the table, the images doubled and dead as
the past.

no one alive
when the stereo camera

But, fit the card between the wire guides, and slide the viewer up and, then, back, and it
breathes—the snow mounds fold and threaten to tumble upon us! We can hear the top
hat struggling, puffing against the storm!

impossible! but
even movement’s not too much
imagining


And my beginnings of the next painting in the (possible!) series: 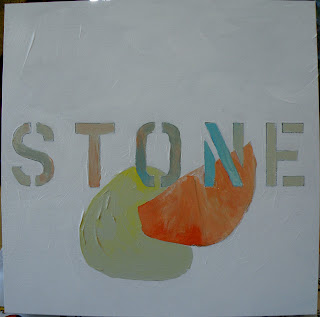 I would like to quote a letter that Vincent Van Gogh wrote to Theo, but I am taking the quote, the sentences below, from "Every Painter Paints Himself," a very creative, thoughtful set of observations (posted August 26, 2011; please do go and visit http://www.everypainterpaintshimself.com/blog/ ). From that site, then, this idea:

Now I know that Van Gogh didn't mean this literally. But I decided to give myself an ssignment and paint it, literally.  I was thinking of a bird in a nest, and stencilled in the word "BIRD" on my canvas. Then I sketched and painted, over and under that word, the recollection of our visit some years ago to Jane Austen's cottage and her writing-room.  The canvas is as tiny as the bird and the room, 10 x 10": 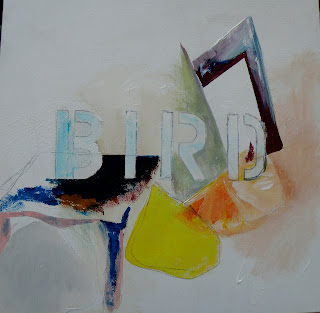 Thanks to Simon Abrahams, the blog's author, for the suggestion.

So my (2 x 4') painted annotation has become a little more complete, today: 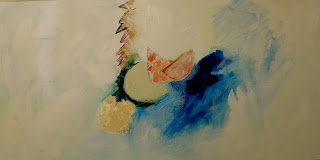 Gertrude Stein wrote, in Paisieu (the full title is PAISIEU: A WORK OF PURE IMAGINATION IN WHICH NO REMINISCENCES INTRUDE) that:
"A name is always cut in orange slices."

And the same can be said for an annotation....

After yesterday (and dreaming about orange slices), I went into the studio and looked at one of my large whited-out wooden canvases and decided to try a centered start; here is a detail: 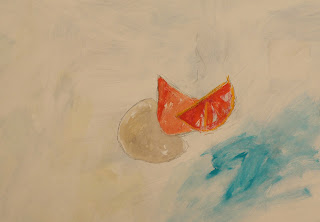 Presence and absence... I expect I will be working through hiding and revealing and overlaying these shapes. One of Patricia Meyer Spacks's characteristically subtle annotations for Pride and Prejudice (see yesterday's post as well) occurs in Volume III, Chapter 1, where she writes that "Elizabeth's change of feeling towards Darcy takes place mainly in his absence" (and she also draws our attention to an article by Susan C. Greenfield called "The Absent-Minded Heroine; or, Elizabeth Bennet has a Thought' from Eighteenth-Century Studies 39;3, 2006, Spacks p. 292).  I hadn't really worked that through; Elizabeth needs time, and letters, and stories, and, yes, absence, to "see" Darcy's true person, to see past the "presence" of his apparently poor behavior.

An annotation for Cy Twombly


I have been reading Patricia Meyer Spacks's annotated Pride and Prejudice. I was worried that she might include too many instances of mere "translation":  Bingley's "design" means his "plan," that sort of thing.  And there are a few simple explanations... but principally what matters to Spacks is her observations.  She discusses the importance of the "visit" -- acquaintances must begin, yet only a man may visit another man, and that first visit should be made promptly (p. 31, note 13) -- I feel these notes are very useful to twenty-first-century readers, who do not "visit."   About a request from her father, "What say you Mary? for you are a lady of deep reflection..." that poor Mary is unable to answer, "Mary wished to say something very sensible, but knew not how," Spacks says this: "Austen's capacity at least momentarily to solicit sympathy for foolish Mary, as earlier for foolish Mrs. Bennett, suggests the breadth of her comprehension" (p.37, final sentence of note 17).  It isn't simply vocabulary, or story ... it is the very nature of the author's "comprehension."

This got me wondering about the nature of annotation, and, beyond its meaning an explanation or comment,  the origins of the word: it comes from the Latin annotare, "to mark."  And I thought how used we are to annotating texts and reading marginal notes in texts; but we are not at all used to the idea of annotating a painting. Museum and gallery labels inform, but distract from the thing itself. Perhaps words are not the useful thing to comment on painting. Maybe we need to go back to Stevens's "Idea of Order": creative marks may be made to comment on other creative works... paint and pencil annotate paintings and drawings. So here is an annotation for Cy Twombly from me, a drawing called "Orange Slices": 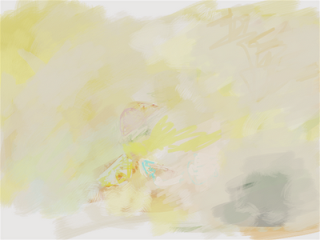 Totally out of white paint....

after a day of re-visiting and then painting over three not-so-wonderful paintings (two at 2 x 4' and one at 18 x 24") and re-arranging the studio. Gorgeous day, empty paint jar: 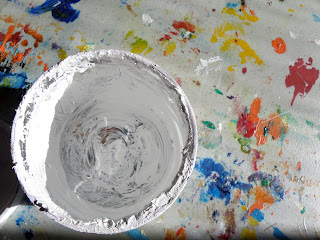 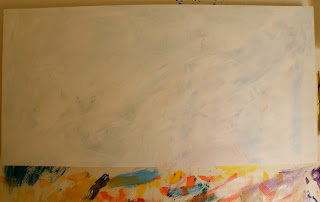 Gorgeous day, a new small sketch (pretty realistic, for me, Central Valley and our "Tunisian" chairs): 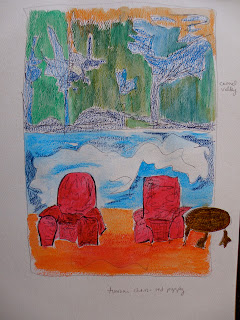 Thinking, once more, about Cubism

The "early"/Analytic phase of Cubism came together through the combined efforts of Georges Braque and Pablo Picasso. Cubism came of real struggle. No-one had ever pulled all the pieces together before. And the resulting new painting was harsh, jagged, deep, an ugly overthrow of everyone whose recent art was so pleasing, from Klimt to Renoir. "Synthetic" Cubism, then, coming later, when the tempest winds were calmer, amounts to something far less potent.

I had not ever worried about this distinction until now. But I have just been reading "Dime Novels," the final chapter of Rosalind Krauss's "The Picasso Papers." And while distinguishing between these phases is not her full argument, it is a distinction she feels to be crucial. Were the later practitioners leaning on their oars?

Douglas Cooper's The Cubist Epoch changes the names and takes, as he says, the terminology of Renaissance art (which, he says, held sway for about four hundred and fifty years by painting "only what the eye sees of things, incomplete and deceptive though this may often be" until Cubism arrived). Cooper prefers the terms "early" Cubism (from the end of 1906 until the summer of 1910), "high" (summer of 1910 until winter 1912), "late" (a.k.a. Synthetic, the time of collage, roughly 1912-14) and an "aftermath" (not a Renaissance term, but a time of freer development of the art by Braque, Gris and Picasso).  "Early" and "high" Cubism are also, for Cooper, "True" Cubism, and Picasso's "Three Musicians" was the end of Cubism entirely, he says (pp. 11, 13 15-6).

If we think of the important phases of Cubism as those which taught us to see... taking the slight upward tilt of Cezanne's tables all the way, or thinking of all sides of an object instead of just one... yes, both sets of categories, Krauss's and Cooper's, work perfectly. The latter phase does seem to be weaker. Let's look.... 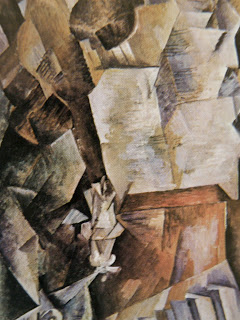 Cooper says that, generally, Braque's work from this time is "painterly, lyrical, suave and cohesive," and he says about this work that it is "superb," the "faceting" is "elaborate," yet "the objects represented remain legible' (p.44).  Yes, to all that; also, there is an incredible, dizzying depth here, that I can't readily unpack.... and yet the whole work looks effortless.  Our second example is by Albert Gleizes, again in a detail; this "late" Cubist painting is called "Harvest Threshing," and it is from 1912: 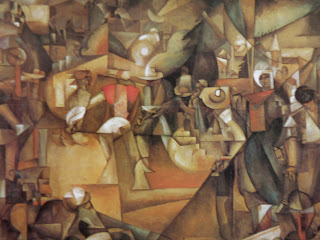 Cooper is very critical of this work, saying that "nowhere are the geometric forms derived from the objects represented, nor do they serve to create volumes; sometimes they are awkward stylizations, often their significance is ambiguous" (p. 74).  And I agree; while the painting is very pretty, with a round frame of figures that functions almost as a wreath, its tidiness is very flat.  It is totally off its point, it seems to me; if I were looking at this without its title, I would see it as a portrayal of an indoor scene, dancers and spectators on couches.  One-point perspective is still there, I would argue, just a little dazzled by a refined re-arrangement; not the point of the Cubist endeavor, not at all.

So,  the "late" works, the Synthetic works are, with a few exceptions, different. Perhaps it isn't fair to say that the painters are leaning on their oars, since Gleizes, for instance, is a co-author of a treatise on Cubism; he took its directives seriously. Maybe the temptation towards the harmonies of one-point perspective are unconscious, here, but the pull seems clear to me. Stand just there and don't move. The pull of that vanishing point is so ingrained that these artists didn't see it there... it's just that, in this painting, the vanishing point is in the center. Still pulling us in, hypnotically, not breaking the spell... Cubism may not be "a monument" (see my May 11th entry) but it does mean to break the spell.