Space as the Object as Object: Damien Flood at Green on Red Gallery, Dublin, Ireland

“In art there is only one thing that matters: what cannot be explained.”
from the notebooks, Georges Braque

We were visiting Dublin in January. Green on Red is a fine experimental art gallery there, with a terrific curator and a great space, and I have written about it before: (http://artistinanaframe.blogspot.com/2012/08/anything-is-mirror-vexed-endings-at.html).  Through February 22nd, their newest show, Damien Flood’s Interior Sun,” is on view. The largest paintings, works such as “Interior Sun,” (150 x 125cm), will pull you in immediately, 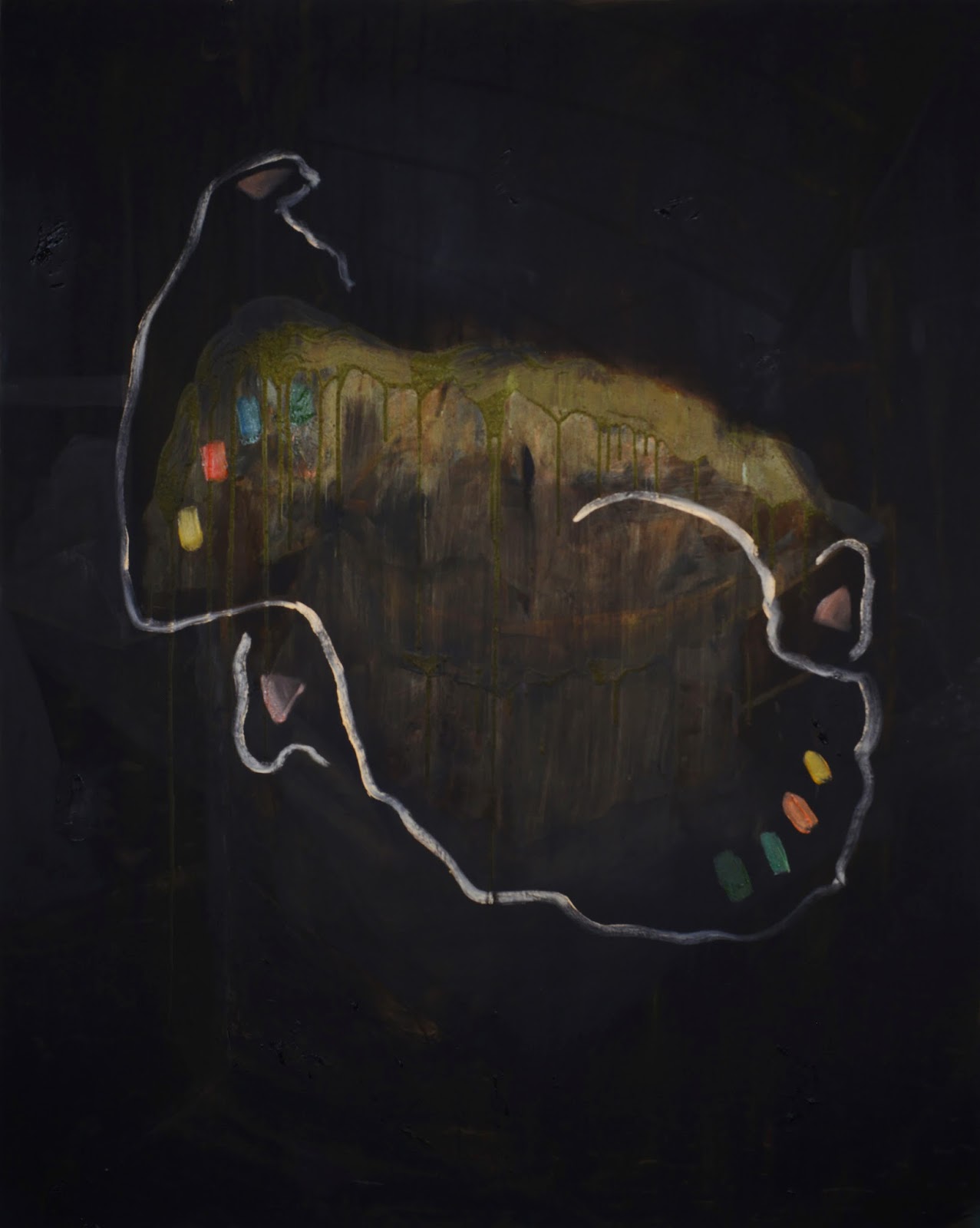 and become your true love (at least, for the moment that you stand before them) offering clean, stark, fore-grounded heroic strokes of movement against quietly  complex backgrounds. The space is clear, the brushstrokes objects in themselves. The nobility reaches back to an Abstract Expressionist core. These paintings are the sons and daughters of Motherwell and Twombly. Flood calls these resolved works “‘pop songs’ “ (interview with James Merrigan, Afterworlds, 2013, published by Green on Red Gallery, Dublin; from here on, Afterworlds).  Flood on the “pop song” process: “when that painting happened, it was ‘bang!’ “ But he also says, “I know the pop songs work too well, and I know that curators will usually love them. I don’t get anything from them” (Afterworld).

Now, to be fair, Flood hasn’t said this about any of the works in this show. But I am going to go on record and say that the term “pop song” does indeed include “Interior Sun.”  So I am now going to break with “Interior Sun,” get the lovely, catchy, so-familiar, so-deep melody out of my head, and go for the Miles Davises and Keith Jarretts of the show.

I want to visit with the smaller, noisier paintings, the ones that are still moving and growing and changing, like living organisms.  Flood mentions that “the paintings that really work for me are the ones I really struggle with”  (Afterworld).  A painter’s hardest moments, I have always thought, are those where the painting is going along very nicely, behaving, it’s working, and then, suddenly, the damned thing rises up and resists the painter’s every move. When I am painting, this resistance, this sudden awkwardness on the part of the painting, can make me think “it’s over.”  But looking at Damien Flood’s show, I realized that, no, that’s when it’s all beginning!  Take a look at “Slouch” (90 x 75 cm): 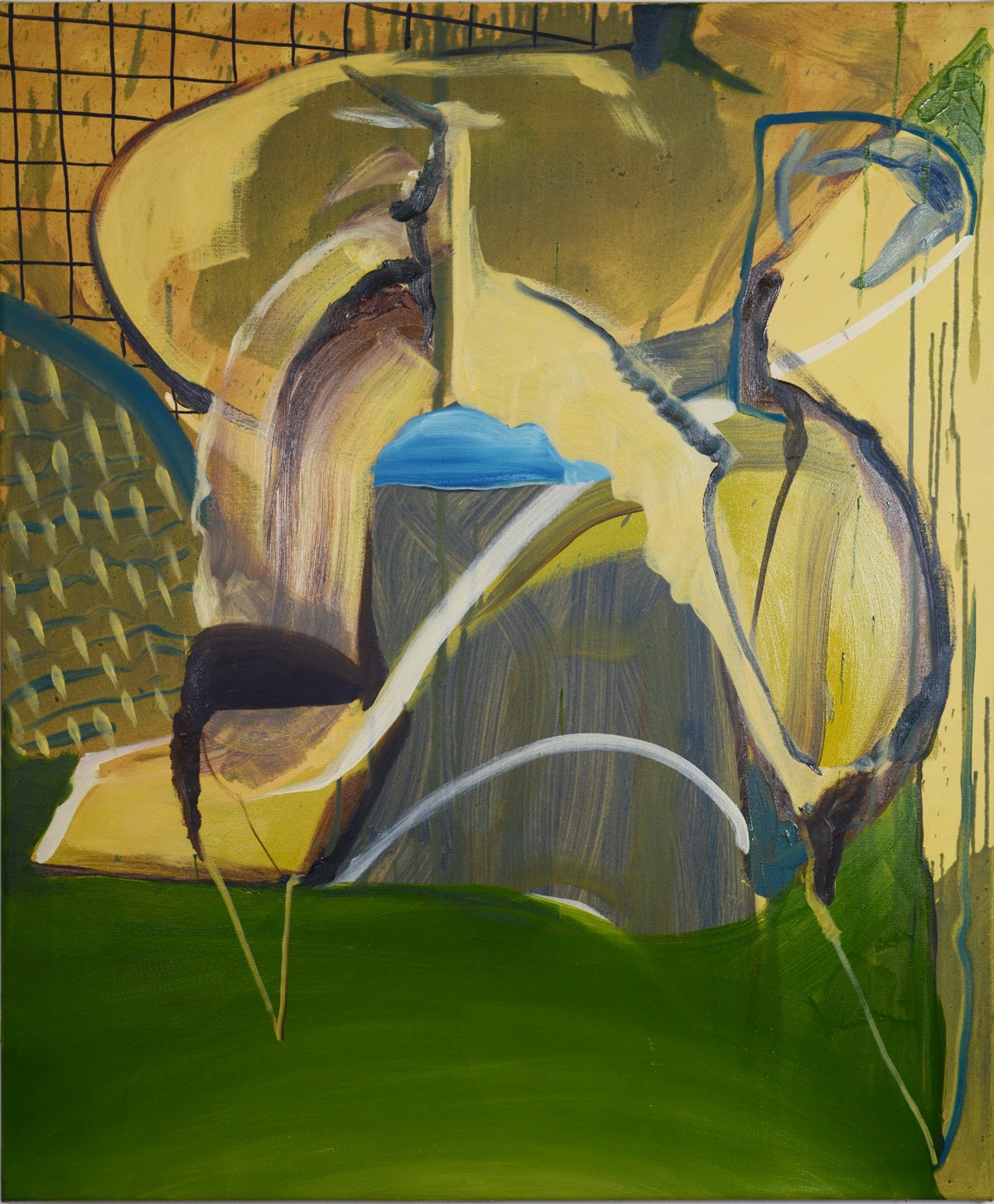 In the notes for this show, the gallery tells us that we can see “the jostle of marks and strokes and lines” here. Just as we are often pulled in to paintings that are resolved, noble and clear, we should also be ready to be pulled into this kind of layered ambiguity. Here, there is a lovely little patch of blue a little north of center, falling lines of paint enclosing it, a just-a-bit-off grid upper left, a few drops of paint left, drips, a field of muddy green paint below.  This painting is an utterly lovely mess.  It shifts... it won’t be caught.... fighting the reasoned sense of space is that pattern in the back,  and the drips, and the colors, and the sheer effort the painting expends to reduce all your attempts at solving it ... to nothing. It won’t be catalogued, or boxed-in, or reduced to a mere thing. This painting has been given its own life. Because, as the show’s publicity says, “there is an unpredictability and courage here that is nerve tingling and alive.”  Yes.

The first is Elizabeth Murray, someone whose lithographs are on show at Stanford University’s Cantor Art Center.  In an interview several years ago, Murray said that abstract work is always difficult to see:

You’re confronted when you are looking at a painting where you don’t have specific images .... You’re confronted with something that you are challenged to resolve and unify in some way, because there is a unity there. I keep harping on this – and that’s what has to work. What has to work is it has to resolve in secret almost.  --pbs.org/art21/artists/murray/clip1
Murray has it right. The viewer needs to be presented with an unresolved work to keep thinking about; otherwise, we may as well all be painting daisies in vases, something to walk by quickly on one’s way to lunch. Take a look at “Down Dog,” a lithograph from 1988, 41” x 50 3/4 “: 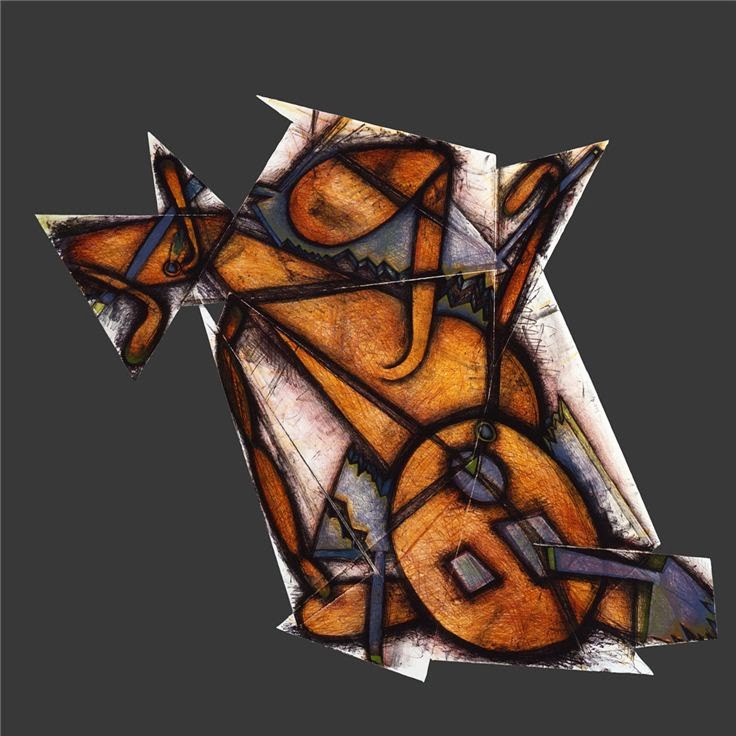 Murray has been dismissed (without any analysis or reasoned interpretation, as here with Hilton Kramer: http://observer.com/2005/10/caution-to-viewers-murrays-paintings-may-induce-vertigo/#axzz2t2DjBJwJ) but she has been ably defended by Jerry Salz.  Why isn’t she accorded the respect due her? Salz writes that it could be due to several things:

First, her idea of beauty, while juicy, is dissonant, deviant, and brash. It is an unsettling, tempestuous beauty .... [and] There’s very little visual letup in her art, which can make looking at her paintings vexing .... Her iconography is domestic ...  [but] the vibe is cosmic .... Everything is replicating, shattering or turning into other things .... Her space is orgiastic and overflowing .... Murray has pulled painting apart, moved it around, made it physical.
“Relentless Tempest,” www.artnet.com/magazines/features/Salz

Murray herself has said that, when she went to Chicago for art school, she was no longer under pressure to be “ladylike” or conventional. She loved the students she met:  “As much as I wanted to be an artist, I wanted to be different the way they were different, because it felt like freedom!”   --pbs clip, as above
I find Murray’s work uplifting and brave, and I think she reaches out to her audience with a fresh, new iconography and a new eye for color. She and Flood are very close in their daring and their unexpected lack-of-exact imagery.  It’s about painting, but it’s also about living, fighting past the pop song to the stillness between the notes behind.

The second artist with a straight line to Damien Flood’s work at Green on Red is Georges Braque.  Flood admires him, as the conversation in Afterworlds shows. Flood’s Braque’s is not the man of the early Cubist discoveries, chained to Picasso. I think Braque’s later work, with its confounding inclusion of the “everyday” object (just given a glancing blow) is far more powerful. Flood’s objects float in the same kind of space as Braque’s and, while Braque’s everyday painted world gives us more recognizable, tactile “things,” there is a shared shadowy light and bent solidity in both artists’ work. Here is Braque’s “Billiard Table,” from 1944: 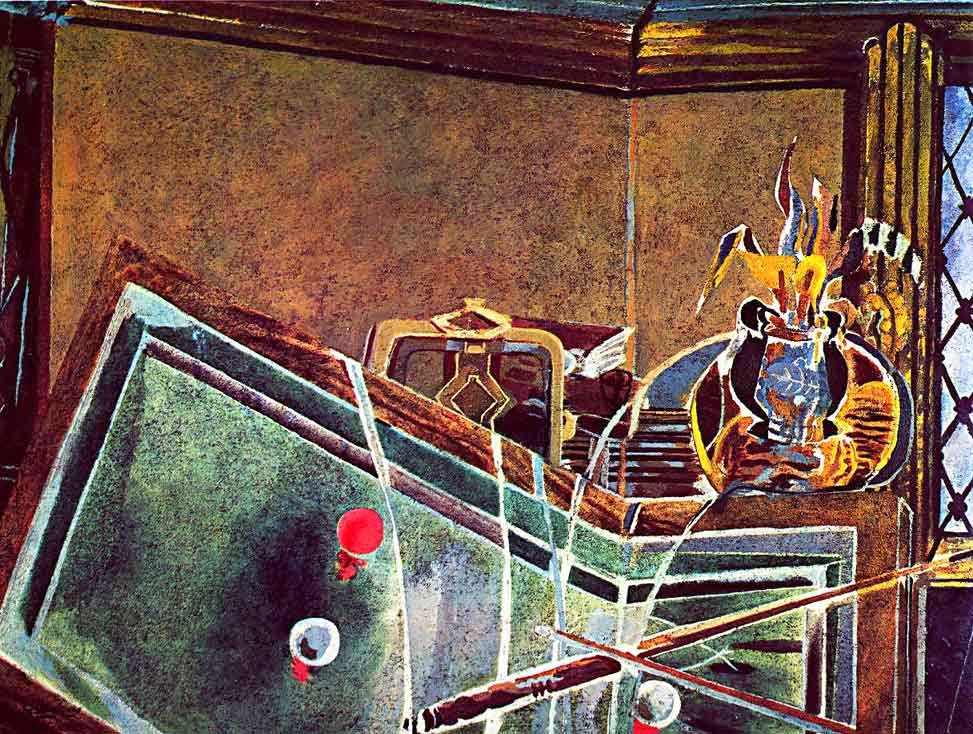 The corner of the room is almost three-dimensional, but shut off, in real representation, by a dense line that opens that corner like a book, with the billiard table springing out of it.  And just when the viewer sees that, the front-most pool cue resists it, because it is straight... 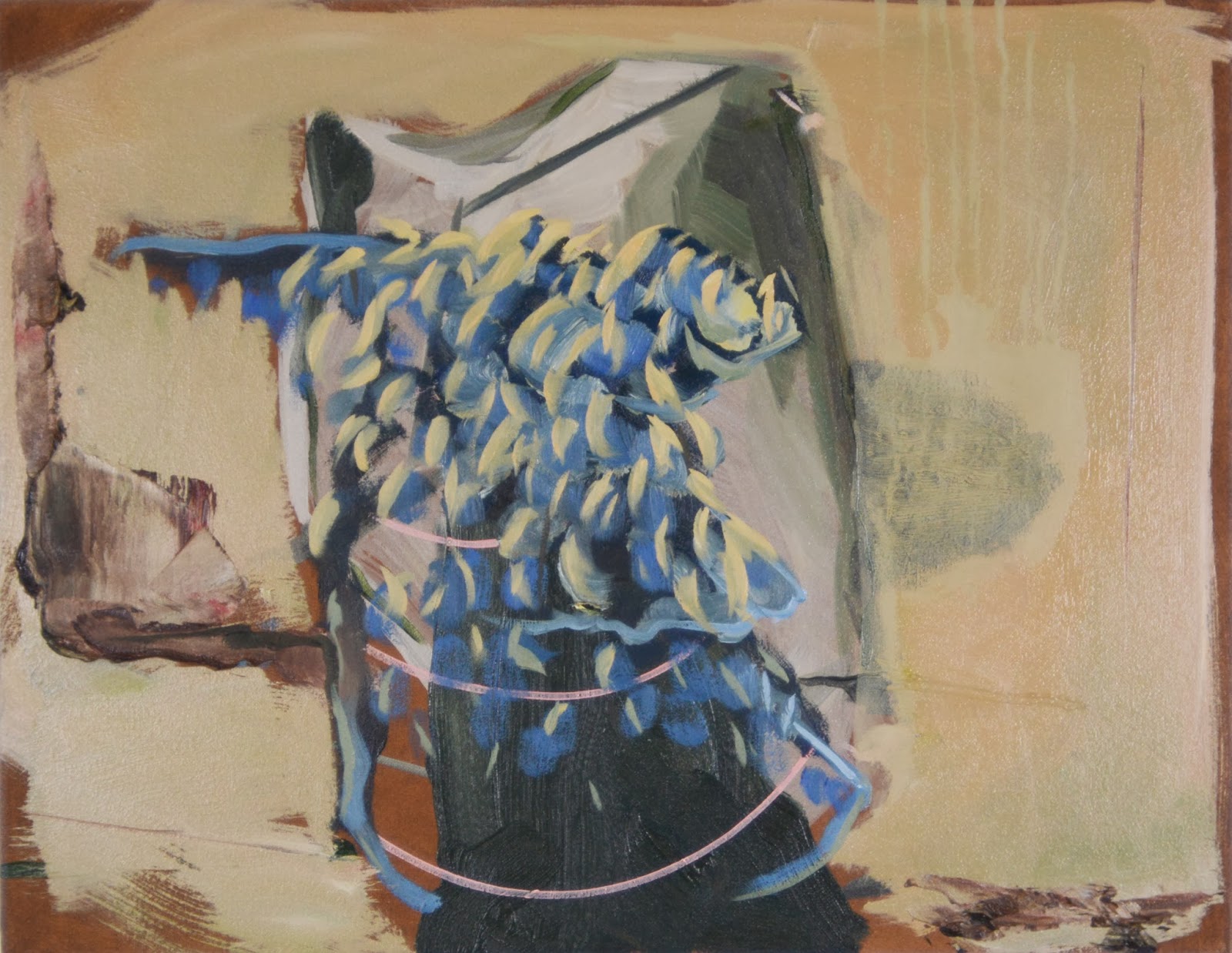 One could perhaps say that the title of this painting, one of Flood’s most descriptive (!), means framework, something to hang onto... but, no. The painted (apparently foregrounded) “object” here is uncertain, hovering, its colors muted, with an overlayer of hesitant blue and yellowed strokes. The longer one looks, the more the “object” recedes ... and then comes forward.  It is open, it is closed, it is floating, it then becomes deadly solid and pulled down by gravity. It won’t be readily resolved. The painting has won.

(Thanks to Jerome O Drisceoil and Martin Rochford!)
at February 11, 2014 No comments: