Inside Confined Spaces and Breaking Free

We drove into Milan... its historic, winding vortex of streets was pretty tough to navigate... and difficult to fully appreciate until we parked our car and walked the cobblestones and piazzas.

My eye kept moving towards the fitted-together, the deliberate, artistic urge to design even the simplest thing. A parking lot, where each stone was fitted into the cement:


The wall of the caffé LARTE (these are real books!): 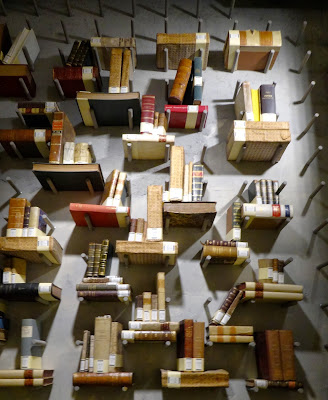 An even more apparent frame, the Duomo, is pulled together with thousands of figures:

We came to Lyon with this mind-set and... find the same compulsion to repeat and confine and build: 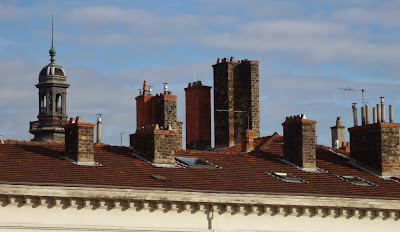 And, a well-protected tree: 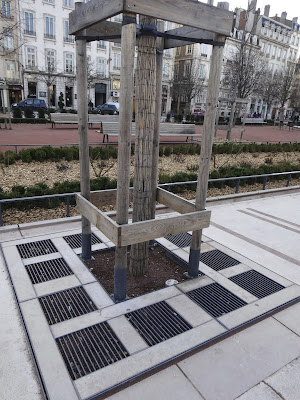 So I drew "Bubble Breaking Free," playing with the ways the water breaks the flat patterns of the paper: 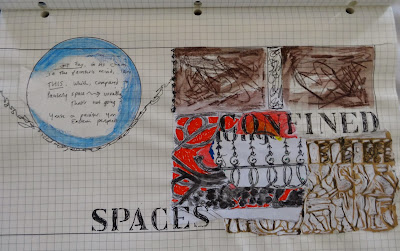 We drove from Macon to see family who live between Annecy and Geneva. We drove up into the Alps in Haute-Savoie for a day of seeing goats, cross-country-skiers, and to eat in a small and friendly restaurant. It was very friendly, that is, until the table next to ours was set on fire (by the meats-over-coals dish the couple had ordered). The customers were not worried... as the waiter was putting out the fire, their only remark was “more sauce, please.”

After our two days there, we left for Freiburg, a city that was re-built (after WWII) according to its original city plan. The streets are narrow and lovely, the store- and hotel-fronts blend old with new, and there is a canal running down one side of all the walking and biking streets. Our hotel has been running on Oberlinden for (roughly) 700 years. Here was the view: The city’s people are very friendly, and the shops very interesting   —   do you need an umbrella store? 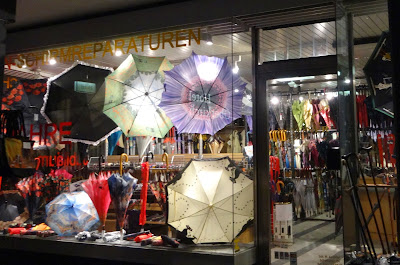 or a lovely restaurant? 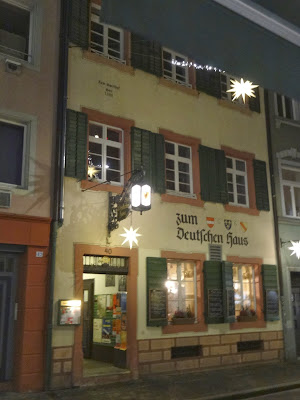 Moving north, farther into Germany, we noticed that the houses became more concerned with rooflines... that is, each house and barn seemed hugely roof, against the snow to come. And there seems to be some interest in trapping the sun through solar panels: 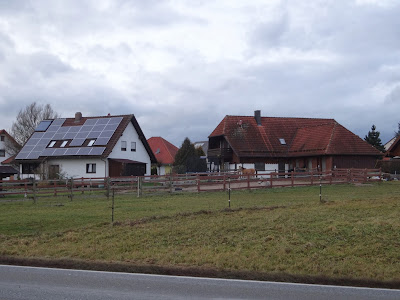 We had planned to visit more cities, but, on finding that our next hotel had lied to us (they were not in Heidelberg, so it was impossible to find them there), we decided to change our plans. The autobahn is awe-inspiring; if there are no work-stations or problems, the speed limit is up to the driver, who can go as fast as desired, as long as s/he maintains control of the car. We were also seeing that cities seem more alike, from one country to the next, than countryside, and we thought the German countryside utterly gorgeous, so, why not slow down and see the landscape?

As we drove, we saw geese and swans and hawks, and chased down hotels (that we sometimes could not find) and small and interesting villages. “It’s a wild goose chase!” my husband said, and, yes, that’s what we have begun.
Logs are being harvested and stacked for pick-up. These smaller roads are accompanied by walking and biking paths. It is late in December, but the fields are still green, or ploughed up for the next crop. Vineyards are stacked up on careful hillside shelving. We pass a glassblower’s huge compound, an Audi factory, a “polizei” speed trap (cars here blink their lights, too). Someone has died along this road and her family has left candles and a white marble angel. We stay in two hotels in a row run by families; one speaks English, the other does not. 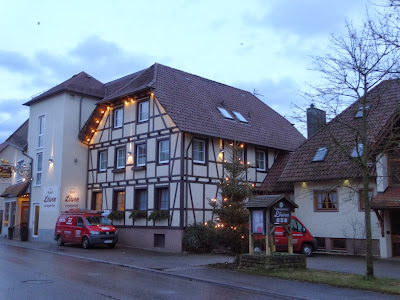 A covered bridge: “Did you think they started in Vermont?” my husband asks. We are driving in and out of the Schwarzwald, the Black Forest. Woodpiles become very important: 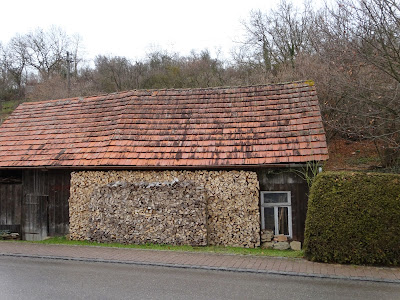 Two shaggy cows. Muddy sheep by a beautiful stream. We drive higher into the mountains, and see snow, ravines, waterfalls, and our car tells us “Risque de verglas” (black ice). The woods are dark and deep... again, Robert Frost didn’t invent these forests... these are fairy-tale forests, thick with moss... and dragons. I start reading Grimm’s Fairy Tales.

We stop for a Renaissance castle, WasserSchloss Glatt, with moat and timbered buildings: 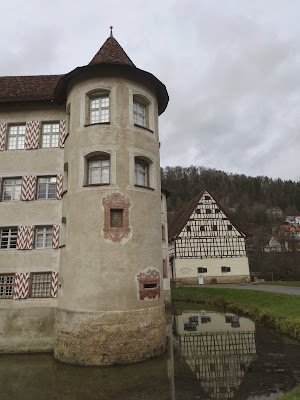 And a town, later, on the Bodensee, called Meersburg, with defensive walls: 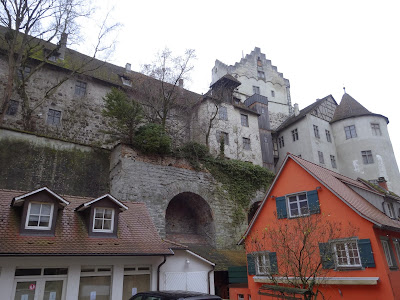 This is a fairy tale. Charley looks at the orchards, bare branches now, with a few scattered apples left: 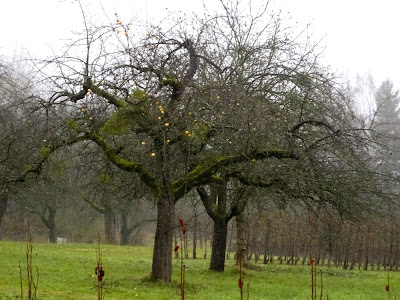 and he says the apples seem to have given way, over the years, to decorated shiny balls and the Christmas tree.

I start a drawing: 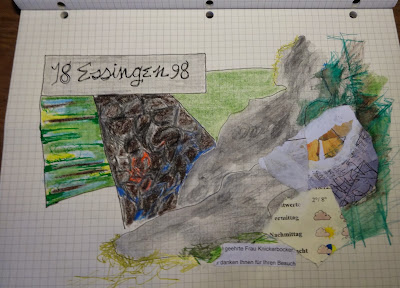 The autoroute in winter

We left Paris and drove the A6 past Fontainebleu... the forest goes on forever. The shadows of the trees lengthened as we drove. It was 2 degrees centigrade when we started in. We saw turned-up fields with frost settled into the lines of the tractor's tires. Just outside the péage (toll gates) at Fleury-en-Biére, we saw a huge abstract painting-- something along the lines of a Joan Mitchell. Just there. We headed deeper into Burgundy, and the road is now called The Autoroute du Soleil (the highway of the sun). A church with a pitched slate roof tells us we are still pretty far north. Clustered village and two distant farms, a yellow "la Poste" truck on the parallel little road.

Mistletoe clusters in bare trees... the mistletoe is green against the greys and browns. More frost, now on the grasses near the highway. A fat French hawk on a fence. The greens in the field sparkle... melting frost? Shadows of trees stretching down their hill.

Then, a "Pays de Charolais" sign, and up come the white cattle against the brown and green grassy hills. We see two more hawks.

Then the "Côte d'Or."  Tidy little (trimmed?) hedgerows around planted fields, and more white cattle. Two trees, nearly disappearing under the mistletoe. Then we see our first field of rolled hay bales.

Molly and Bloom... two people, in one. Molly, in James Joyce's Ulysses, stays at the center of Bloom's moving world. One part of us moves, one part of us stays. This is the time when we are moving, and loving the moving.

It is so beautiful here. Charley sees a hawk hunting.

Fifth hawk, passing the Chateau d'Eguilly. A broken, but still imposing, fort/castle. A village behind, still protected. A hillside, all snow. Clumps of grass sticking together, iced and green all at once.

"Chateauneuf" village off to our left. The canal de Bourgogneon our right. Then, the valley of the Ouche River, all white hills.

All of a sudden, everything is mist. Like a fairy tale. Then, at the Beaune exit, grapevines covered in white frost. It is now -2 degrees centigrade outside. Sixth hawk. Department: Saône et Loire. Seventh hawk, huge and shaggy. 8th hawk, then birches, with some yellow and some frosted leaves.  -1 degree centigrade. A row of farmed poplars.

Now it is 0 degrees. The grass is green again, but anything standing up in the air is white: bushes, vines, straggly grass, trees, fences. The houses remain grey and beige. Ninth and tenth hawks.

Our diesel Citroen C3 has used 1/4 of its little tank in 4 hours.

13the hawk. 14th hawk, wings spread, looking down at his claws.

We arrive in Maçon. We fall, somehow, into the best, smallest, warmest restaurant in town. 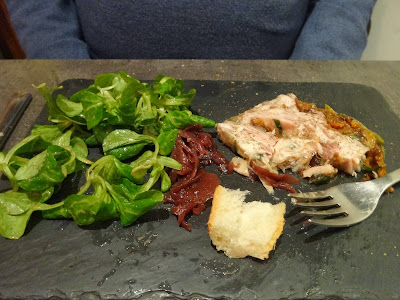 This is lapin en gelée with mâche salad and onion confit at "le Carafé: Les Vins en Liberté," a bistro-cave in Maçon. There are three choices of first course, three choices of second, three desserts. The wines of the night were Minervois and Morgon. A man came in from his vineyard with a bottle of Volnay and gave us a taste... we then talked with some of the customers about wines and Maçon.

Today, we were wanderers. 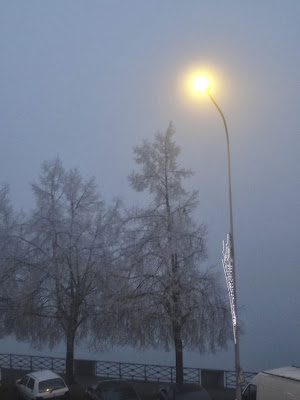 Monuments and Archways: Constable and Pissarro

I have this idea that the world of art divides into monuments and archways. I think of a monument as something created at the peak of an artist’s desire to solidify every artistic achievement that has occurred up to the moment of signing the art work. Up against monumental art work comes the archway piece, the one that an artist makes as s/he looks towards an un-realized artistic future.

I’m going to take two small works, both in London’s National Gallery, as examples. John Constable’s “Cenotaph to the Memory of Sir Joshua Reynolds, erected in the grounds of Coleorton Hall, Leicestershire” (from 1833-36) helps my theory by being a painting of a monument, 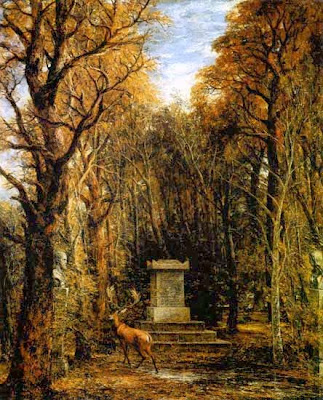 but that’s not why I chose it. Constable has put everything he knows into this painting, everything about every leaf, the way light falls within a cluster of trees, the way dead leaves blow onto stones... it’s a memoriam to everything he would have us know that Reynolds means to him, but, more than that, it is everything, down to the stag, pictured in an almost photographic perfection.It is letting us know that a painting of a landscape deserves the same recognition as a painting of a battle.

It, too, is a landscape, but something is different. There is a tree, but it is sketched in, a fence, caught in a few brushstrokes, dirty lines of snow where the carriages have come, a man meeting women... nothing is firmly placed. This is not aiming at grandeur. Blink and it’s gone.

Even though the Constable places us in the center of his personal artistic debt, and it’s a beautiful and arresting work, the Pissarro feels more personal to me. The viewer is invited to walk down that same road, in that same contented mood, crossing through the archway that links us (impossibly, but artistically) to a country road in 1870.