What a Thing Is, Until It Isn't: Nava Grunfeld and The New Still Life

In a letter to T.W. Higginson written in August 1862, Emily Dickinson wrote:

I think you would like the Chestnut Tree, I met in my walk. It hit my notice suddenly – and I thought the Skies were in Blossom.

Dickinson came upon a chestnut tree in Amherst, Massachusetts and sees it, “suddenly,” which is odd.  She was likely to have traveled the same paths on her walks, so she would have known the pattern of trees, the hedges, the houses and winding drives, and how to step around onto slate where the mud might be thick. So she was probably thinking -- rather than seeing -- as she walked, not noticing, until she did see, all at once. And it’s the sudden-ness of seeing that she writes about here. She looks up and (possibly in a moment of poetic license) sees a flowered sky, not a blossoming branch. And it is that moment -- of the breath being stilled by beauty, or love, or truth -- that this poet catches so frequently in verse. Perhaps, the next time you look up, the sky will be blossoming.

Whites and pinks against green against a blue sky, with clouds travelling past...It isn’t often that we allow ourselves to come at something from a “different” angle.  But it does happen! I went to an opening recently, in Northampton, Massachusetts, (the town next door to Dickinson's Amherst) having met the artist, Nava Grunfeld, in passing, at our local printer’s... and this show was gorgeous, just like those chestnut blossoms against Emily Dickinson’s sky.

Nava Grunfeld’s show, “The Language of Color,” will be at the Smith College Alumnae House through December 9th (weekdays 8:30-4:30).  If you are anywhere nearby, I urge you to visit. Here is a detail of her painting, “Pellegrino,” in acrylic and pencil: 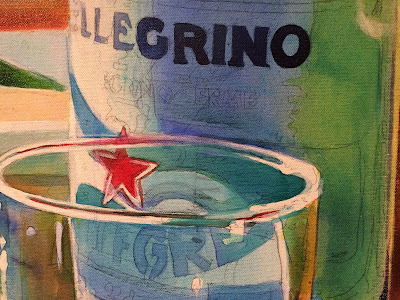 In this part of the painting, it is possible to see both a delicacy and a burst of emotion: the artist is working in the lines and out, it’s careful but it’s got life, it’s something we see everyday, but, here, it has been given its moment.  There is an exuberance to this work that really catches the viewer and pulls... Part of this pull is the technique: the brushwork that allows for the sunlight to catch an edge. The other parts are probably equal for me: color and size.

Here is “Citrus,” at the opening, with me on the left and the artist to the right, just to give you an idea of scale: 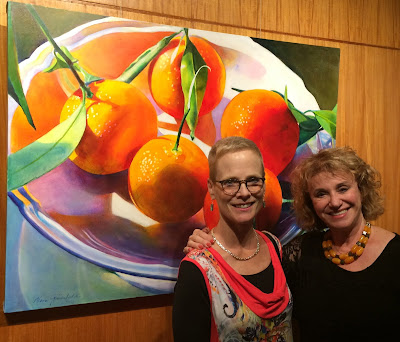 and here is the painting itself, acrylic on canvas, and keep in mind that size: 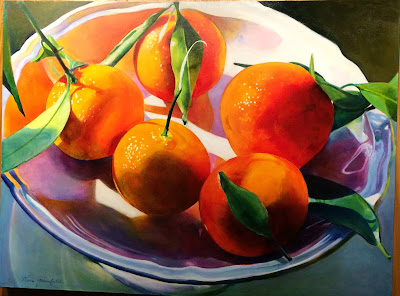 Look at that delicate series of violets and whites and blues to the right of the farthest right orange. This is acrylic paint made delicate, light, so difficult to do, so rewarding in the doing. I have an art collector friend who thinks green ruins paintings. But the greens of these leaves, especially the duo in the upper middle, give us both weight and reflected sunlight.

Grunfeld also works in watercolor, which, around the eastern seaboard, is often used to paint lobster shacks and buoys and marshes in pale, ghostly washes. But this artist transforms the medium into her own limitless still life, as here, in “Dragonfly Bowl”: 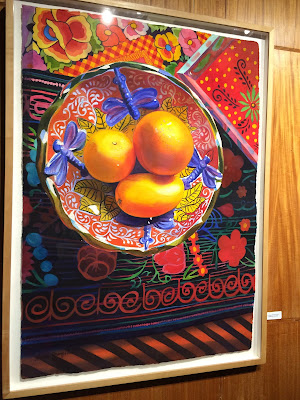 Yes, Matisse is in there, and Cézanne’s tilted tables, and every pattern Grunfeld could imagine... but it works, the way a Lichtenstein’s “Still Life with Lemons” works: 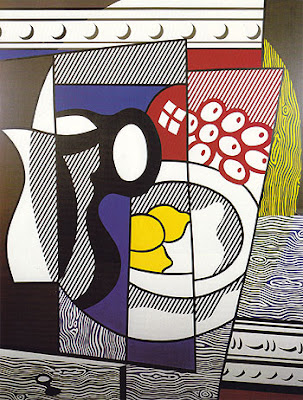 Lichtenstein took Cubism and Warhol and Cézanne and fused them into a new world order. Grunfeld takes the same artistic liberties and blows them up, larger and larger, until you won’t be able to see a table setting in an Architectural Digest in quite the same way again.  Check into “Rainier Cherries”: 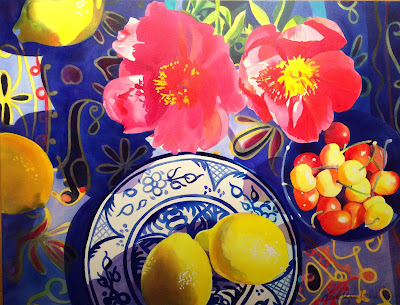 This is acrylic, bursting with enthusiasm. yes, those are blossoms, but only just. They are not overworked, but they have those little white forms that refer to reflected light (more than they represent that light).  This is painterly, referring to the brush, the easel, the objects carefully placed to be pictured, and yet, while we know all that, we are transported, despite our knowing, into the colors and into the moment.

It’s a very grey morning in Western Massachusetts. The leaves have mostly fallen, the days are short, but if you need a sharp shot of color and painterly excellence, if your sky needs to be blossoming, come to Nava Grunfeld’s show. She has a website, as well: www.navagrunfeld.com.  I will leave you with her "Matisse" in detail and in full: 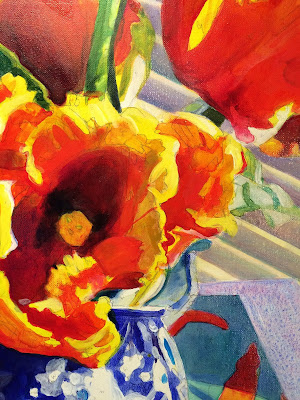 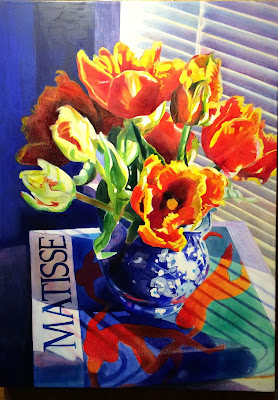