We went to 620 7th Street at Brannan in San Francisco to see this year’s Contemporary and Modern art fair, artMRKT SF.  There is one more day, Sunday, May 20, 2012, and the fair will be open from noon to 6:00 p.m.  If you are anywhere within walking, Bart-ing or driving distance, please try to go.  This was really a revelation to me.

My husband and I assumed that we would be less than fully welcome, as we are not buying Joan Mitchell, Frank Stella, or the newer artists (one price I heard, for a single work by a living artist, was $32,500).  But everyone -- the guards, the executive chef, the dealers, the gallery assistants -- everyone was entirely at home with the art being shown and was sweet and helpful and REALLY into the art.  They were as happy as we were to see it, and every time they gestured to a painting to explain it, they looked at it as if they were seeing it again for the first time.

I have begun working smaller (more about that will come in a post sometime soon!) so I was particularly interested in finding small work with a big impact…. I should stress that there are many LARGE works as well.

I should begin with art we had already seen in one of the galleries in downtown San Francisco.  The Elins Eagles-Smith Gallery, from 49 Geary Street, presented a painting by Kenjilo Nanao, called “Cobalt Night,” from 1964. Here is my photograph: 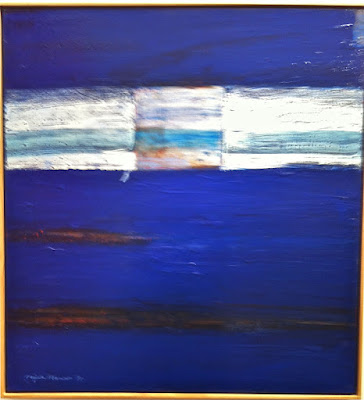 We remembered this painting from before; it’s a sky, or a landscape, or simply a study in contrasts, but even though it is relatively small (32” x 30”), its intense BLUE surrounds the viewer, as if it were room-sized.

I sometimes wonder how it would be possible to take the work of someone like Francis Bacon, learn from it, and create new work.  Jack Fischer Gallery (also from 49 Geary Street) showed paintings by Rogelio Manzo. He has, I think, pulled in closer to his subjects, who are, like Bacon’s, posed against plain backgrounds, but Manzo’s faces aren’t exactly distorted or tortured in the same way. There are worlds in these faces, which is really a feat, considering that these works, too, are roughly 18” x 24”-- here are my photos: 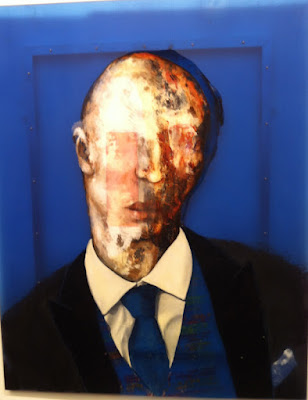 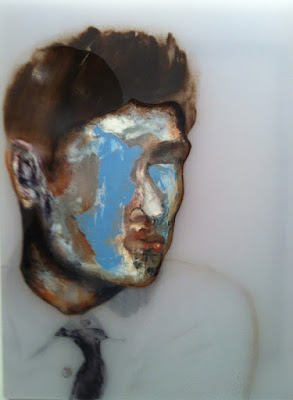 The paintings have a transparency to them, as well, as they are made of oil on resin, so there is a kind of sheen.

Three small studies by Tom Wesselman stood out in the booth from the Forum Gallery (730 Fifth Avenue, New York).  The one I found myself drawn to was called “Study for Drop Out,” from 1981: 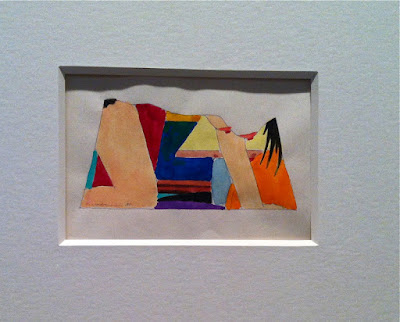 It is so simple, and it’s maybe 5” x 7” – the small shapes and colors fit together to transform breasts, thighs and hair from a body into layers of carefully-carved rock cliffs.   It’s a new way of seeing the human body.

Modernism, Inc., (685 Market Street in San Francisco) had three works by the architect Le Corbusier, which were all gorgeous.  I had never seen any drawings by him before; these were ink, gouache and collaged newspaper or water, ink and graphite.  The small painting below, “Etude pour la Sculpture,” is from 1940: 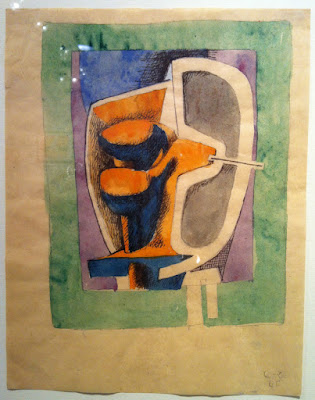 It doesn’t seem 70 years old to me.  It seems fresh and new.  The colors hold from across the room.  The dealer here was very sweet, and gave me a Le Corbusier poster because I couldn’t seem to leave the booth.

The one really big painting (that I have to add in here!) that I liked was by John Di Paolo, roughly 48” square, oil and enamel, called “Accelerator,” and it was done in 2012. His gallery is Dolby Chadwick (210 Post Street in SF). Here is my photograph followed by a detail: 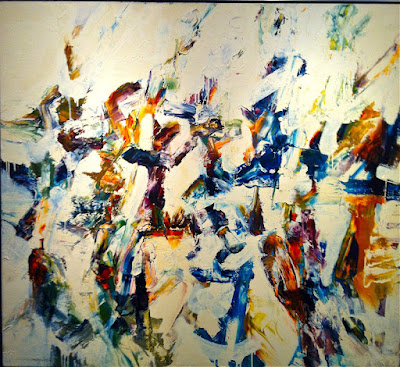 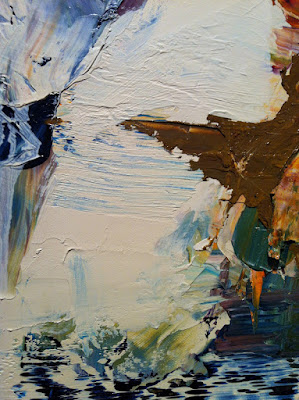 This was really two paintings, in a way, a full-color work and then patches of whitish or ivory paint applied thickly over sections; it is a fusion of Gerhard Richter (the thick application in great palette-knife layers) and Willem de Kooning (the evidence of the hand in many, many brushstrokes).  Di Paolo pulls in a lot of light here.

My husband pulled me into the display of works from the Jerald Melberg Gallery (625 South Sharon Amity Road, Charlotte, North Carolina) where two walls were filled with Motherwells, from his work with James Joyce’s Ulysses and from a continuation of that fascination, a series called “The Irish Suite.” Here are three photos I took; these are all small works, maybe about the size of a hand, but, again, it was wonderful to see the simple power here: 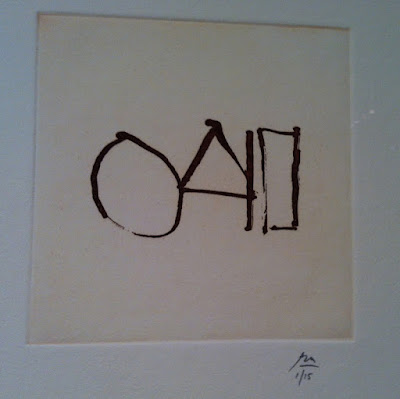 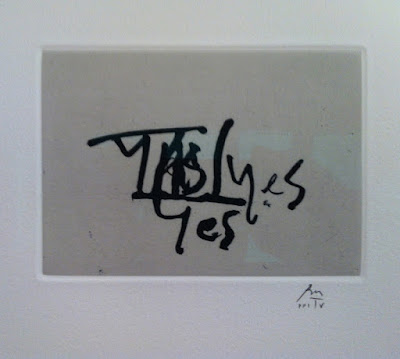 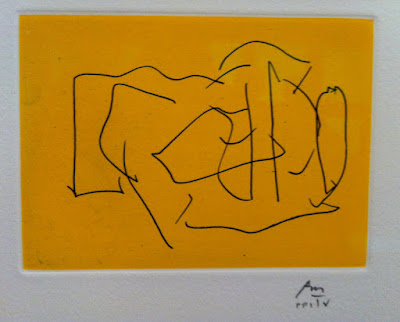 My favorite discovery, though, is an artist who shows with the Boltax Gallery (21 North Ferry Road, Shelter Island, New York); his name is Steven Corsano.  He has drawn a series of 10 works on brown paper; again, very simple, very small, but quite a bit of emotion is packed into his small paintings. Some are neutral in color, others have added bright shapes, some have script, others typed words. These three images are from that series, courtesy of the Boltax Gallery: 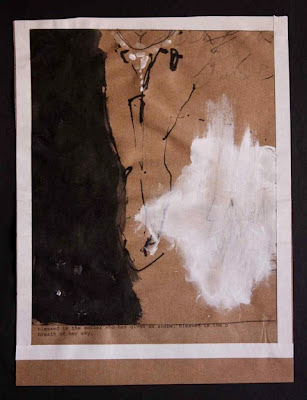 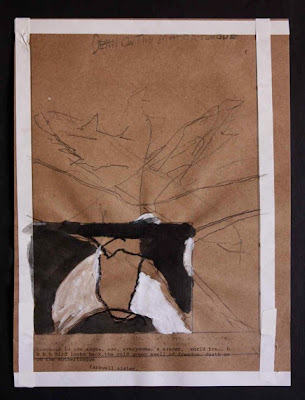 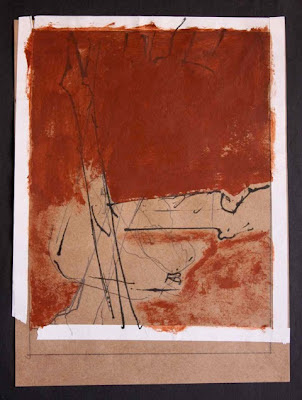 The gallery has generously offered one of these for sale by auction, to benefit the Verge Center for the Arts (details on the auction online at www.art-MRKT.com).

Go, if you can, or visit the galleries yourselves ... this is only a small (small!) portion of what you can see!