Not Bedford, not Poughkeepsie. People who really live UPstate want you to know that there’s beauty along with that deeper snow.  Drive up past Westchester or on through the Berkshires and along slower roads to Saratoga Springs, New York. There’s a lot going on. Step away from the great restaurants and boutiques and into some great art.

The 30th Anniversary Invitational (through October 29,2016) at Saratoga Arts (tucked into the corner of Congress Park) is rewarding.  Well-known local artists who are participating include Katie DeGroot, Anne Diggory, Anne Francey, David Miller and Laura Van Rosk.  But I want to single out just one work.

The sculptor Beverley Mastrianni has created sculptures a person could walk through; one, on Skidmore College’s campus, offered the sounds of people speaking (insulting, as I remember!) as visitors walked through. Mastrianni is still working in three dimensions, but has also begun “painting and engraving through the paint into aluminum panels,” she says, and the new series suits her.  Here is  “Mountain Sketch #15” : 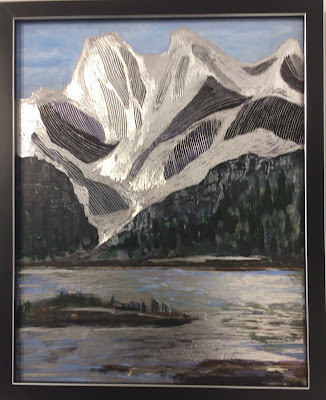 I have read the description of how she has worked this particular small wall piece,  but I remain mystified... and that’s a good thing.  Painted can diminish a mountain; Agnes Martin said of her attempts: “I used to paint mountains here in New Mexico and I thought my mountains looked like ant hills” (from “The Untroubled Mind”).  But Mastrianni’s mountain, while measurable in inches, looms large in the gallery. The sunlight’s etched reflection dazzles, just as it would in a distant vista. The combined textures and colors surprise and delight, and continue to pull the viewer in as s/he stands before this painting.  See the complete show... find your own favorite, and visit this artist’s website (beverleymastrianni.com).

Schuylerville, down the road a bit from Saratoga, might be best known as the site where General Burgoyne surrendered in 1777, a defining moment in the Revolutionary War. Schuylerville’s main street houses a few small businesses in lovely buildings; the Laffer Gallery is at 96 Broad Street (thelaffergallery.com).  Two artists here kept me walking back to their paintings to take another look: Leslie Peck and Teri Malo.

Leslie Peck’s still lifes are perfectly executed in flat strokes made of muted colors. In a different way than Cézanne’s, the objects float off the foundation tables and shelves and move forward, creating two planes (for me, anyway) on a single canvas.  What Peck does to pull the layers together is to add the color red. See “Martini Shaker and Frost”: 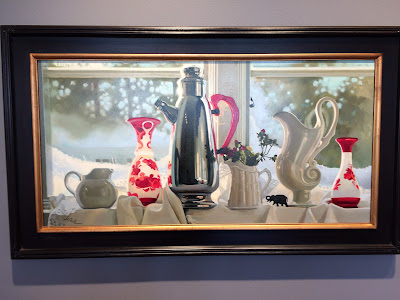 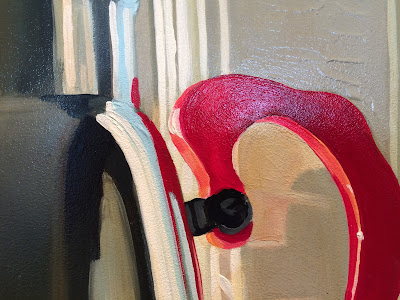 The colors just keep coming forward and receding, in a kind of flow and rhythm that is unusual in a still life.  The frost outside is pushed far away, even though the whites and grays show up throughout the picture.  All that we see is warmth, and the textures of china and metal and tablecloth; yet, somehow, there is also air.

The second painter is Teri Malo, whose one-foot square painting, “Revisiting the Climbing Rock,” is here: 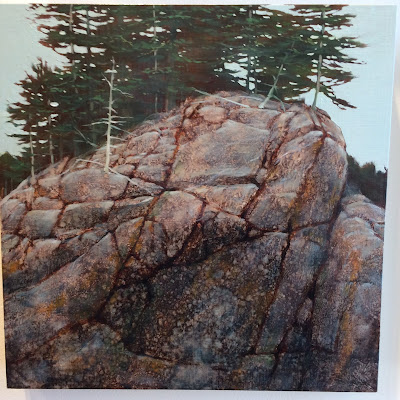 If Vermeer had painted cliff-face instead of drawing-rooms, if all those backgrounds of Annunciations came forward at once... they might look like this. The detail here and the overall impression of time etched into rock is incredible.  I found myself sitting in front of one of Malo’s works just trying to see how it was done... really, you must go and see for yourself....
at October 08, 2016 No comments: