Tintoretto's "Susanna and the Elders": Image vs. Text, Part II 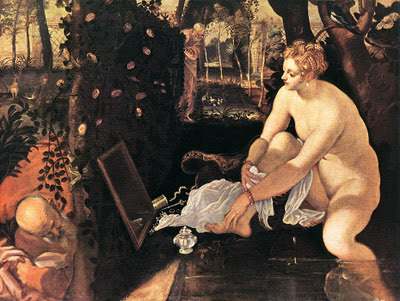 Figure and Ground
We saw this painting at the De Young’s “Masters of Venice” show a few days ago; at 57” x 76 ¼,” it takes up most of one wall and is absolutely luminous.  It is the second of Tintoretto’s known versions of the story (the first is in the Louvre) but this is the one that … well, everyone swoons over. The Biblical story behind “Susanna and the Elders” begins with a habit: she frequents her husband’s gated orchard at the same time each day. The “elders” of the title know this, and arrive as she is deciding to take a bath; Tintoretto captures the moment before they see her and before she sees them. Susanna refuses their advances, for which they punish her by accusing her of adultery with an (unknown) young man; at the trial, their lies are discovered and the elders are killed.  Many painters give us the moment when Susanna becomes aware that the elders see her; Tintoretto shows the elders just getting into position.
Despite the many stories we could follow here -- Susanna’s chastity (in these times, faithfulness after marriage was just as important as virginity before, and the Susanna of this painting was often used as a model to follow), or the idea that “the truth will out”  -- but I would like to follow a line of argument about figure and ground, to see if we can’t tie it back to -- text.
Here is the painting with some lines I have added to trace the peculiarities of the ground: 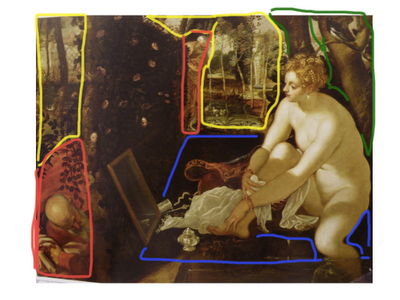 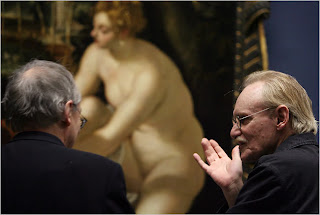 Why not choose another, later moment, as Anthony Van Dyck did, in 1621? 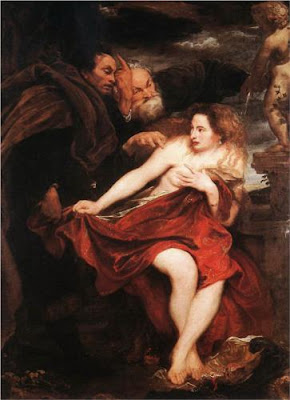 I think we can see why Tintoretto rejected this idea. Van Dyck’s Susanna is not calm, not a study in nude perfection, but a terrified young woman, confined in a small space with two men and three very large hands.  (His aim is very different, of course -- he is a devout Catholic and an emotional painter of religious works).  Van Dyck’s painting resembles a document: “Exhibit A.”  Tintoretto’s vision, in contrast, is so painterly, so light-filled, that it leaves us with just enough room to mock the elders.
Tintoretto wanted achievement: “il disegno di Michelangelo ed i colori di Tiziano” (the drawing of Michelangelo and the color of Titian) was written on the wall of his studio.  The shape, precise outlines, the delineation of the ground in this painting was unimportant to him. “Susanna” was painted in 1555-6, when he was 38, which would be young for an artist now, but in his time… he needed to get going.  “Tintoretto took up either techniques or subjects utilized by the older, more established artists in order both to challenge himself and present his talent” notes Dan Clanton (in The Good, The Bold, and The Beautiful, p. 123). Tintoretto wanted to set off that body. He wanted it to be the first and last thing anyone saw.  Robert Hahn asks, in all seriousness, a question he doesn’t exactly answer: “Is Susanna just another hot babe employed to strip for the bozos?” (p. 645).  And the answer is, in pursuit of text, just … maybe.
at January 31, 2012