Arguing for a Long Look at Emily Dickinson

I came across an article on Agnes Martin and Gertrude Stein. Since they are my heroes, I stopped everything I was doing -- working on Emily Dickinson -- to read “The Meanings of Acts: Agnes Martin and the Making of Americans,” by Brendan Prendeville (Oxford Art Journal, 31:1, 2008, pp. 53-73).  Prendeville is questioning the way the artist makes her work, and, in a kind of mirror image, how that directs the way the audience perceives the work of art.

He begins by showing us Agnes Martin’s “Little Sister,” from 1962, (not re-printable: http://www.guggenheim.org/new-york/collections/collection-online/artwork/5653)... The painting is oil, ink and brass nails on canvas and wood. Martin’s paintings do not reproduce well. They are horizontal ruled lines, in soft penciled greys and whites, usually, and they are very subtle. Here is "Untitled," an 11" square, pencil, ink and watercolor on paper, from 1995: 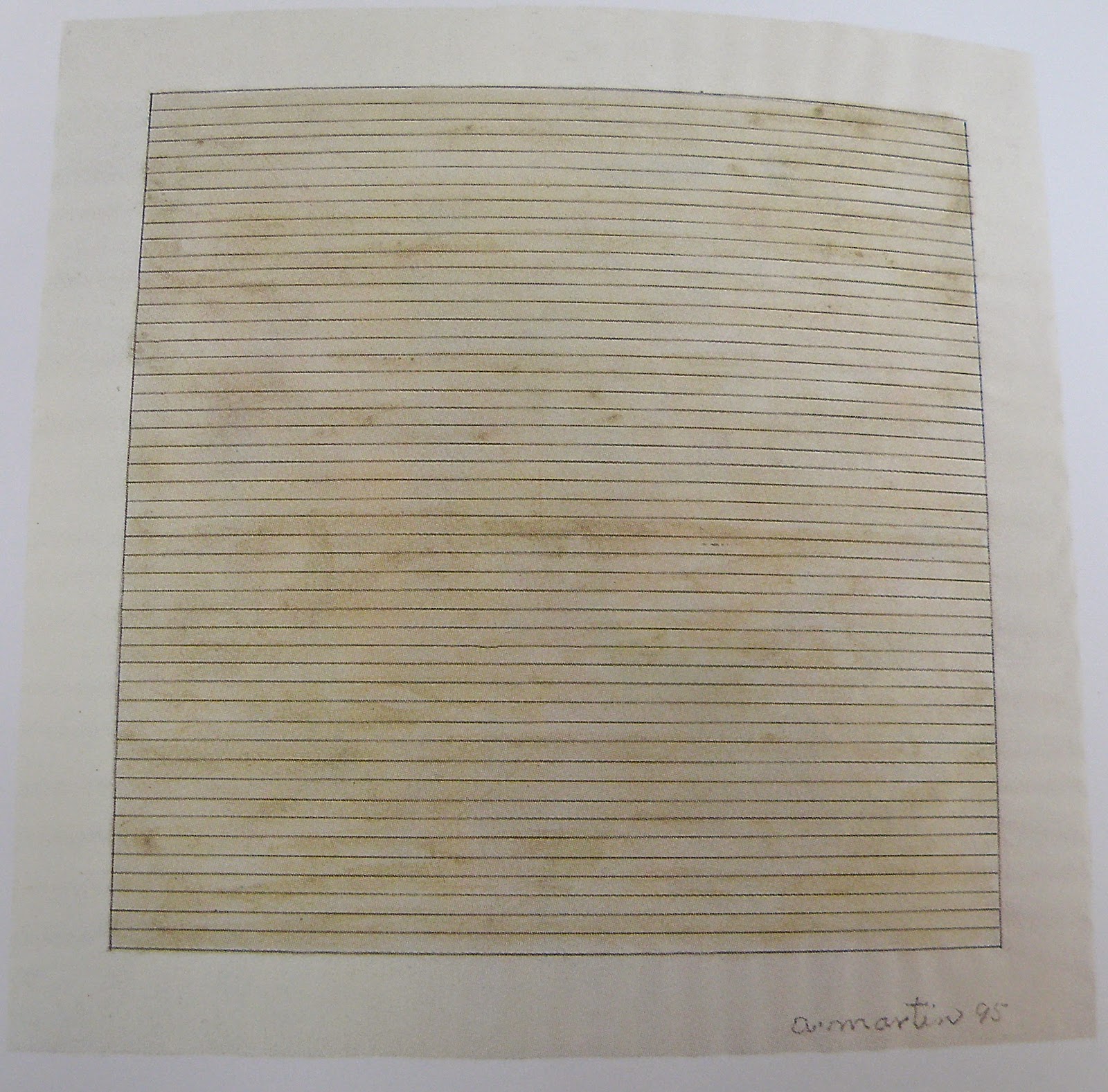 If you have ever seen Martin’s work for yourself, you know that one of Prendeville’s threaded arguments in this article is true. He finds two views of any given painting: the one you see from across the room, which will look like a regular 5-foot or 6-foot square, seeming perfectly angular, with measured marks. Then there is the one you see when you get close, close enough to touch the canvas; you see the hesitations, the pencil marks, the times the pencil slid almost imperceptibly out of grip, the ever-so-slight deviations, almost like little breaths. Prendeville calls these “the trace of her actions” (54).

He uses Stein in this essay as she relates to this mark-making of Martin’s: Stein was interested in what she called “the continuous present,” which Prendeville describes as “the present as we live it now, making it as we make it; the reader of a Stein text participates in its making of the present” (and he cites Ulla Dydo, to whom we are all indebted for a better understanding of Stein, 69).  The “making” is something we see in Stein, and we see it through her repetitions and her insistence on seeing the object....

Voilà. When we get close to an Agnes Martin, when we read a Gertrude Stein sentence or poem aloud, we are following the maker’s trail. And by the way we respond, do we “make” the piece, too? This makes Prendeville uncomfortable, as it should; doesn’t the artist have any more control than that? And so he asks: “Under what conditions and by what means is a non-arbitrary response to a work possible, when the maker of the work has not aimed to prompt any response?” (56).

Exactly. The audience. How to control them?

As I mentioned, I have been reading Emily Dickinson... She discussed her work in letters, sent a few to friends, and perhaps a dozen or so poems were published in her lifetime.  There is strong evidence that she did not seek traditional publication: “If fame belonged to me, I could not escape her – if she did not, the longest day would pass me on the chase – My Barefoot-Rank is better—“ (letter to T.W. Higginson, June 1862). When Dickinson died, her sister found 40 bound packets, known to scholars now as “fascicles,” roughly 5” x 8,” consisting of folded leaves of paper tied together with string, and several poems were hand-copied and bound into each fascicle.  In the very first editing of Dickinson’s work, the fascicles were all disbound. One of the transcribers ripped out passages in the poems and letters, and inked over one full poem.  Other editors replaced words, changed the appearance on the page of poems, and created “normal” punctuation, capitalization, and spelling.  Even the most well-intentioned scholars and editors cannot un-alter Emily Dickinson’s life and work.

And these, we are given to believe, are the good guys, the people who brought you the poems.  We cannot know how to find our way back.  There is no thesaurus, no key.

There isn’t for Agnes Martin, either. Prendeville argues that Martin’s models were Pollock, Rothko and Newman. He says, though, that in their paintings, these artists were not pursuing “recognizable common reference.” Each painting, “in its abstractness... withheld itself and, still more, enacted on the part of the viewer a committed act of attention – a personal commitment .... meaning needed to be elicited” (57).  And so it is with Martin. She demands that we stop and stand and commit. We have to see her hesitating pencil lines.

And who else hesitates? Emily Dickinson. Think of the way the words (when they are presented truly, or when you look at a manuscript) scatter across the page like rising birds. Think of her dashes, which appear in the ms. as dots, and her refusal to use titles or numbers. Here is my transcription of one of her poems from her handwriting. Note the hesitations, the way we are forced to take special care with both words and spaces:

I saw no way – the
Heavens were stitched –
I felt the Columns close.
The earth reversed her
Hemispheres –
I touched the Universe.

And back it slid.
And I alone –
A speck upon a Ball
Went out upon Circum-
ference
Beyond the dip of Bell.

Emily Dickinson wrote to her mentor  T.W. Higginson (and later editor and changer of words) that “My Business is Circumference” (July 1862). And here she is in her poetry, defying the stitchery, riding out upon “Circumference,” far away from mortal sight or sound (a strange thing for this poet to wish for), she who, in life, went only as far as Boston.

Susan Howe, in her fabulous My Emily Dickinson, takes on the stereotype of the sheltered and strange “Miss Dickinson”:

[She] took the scraps from the separate ‘higher’ female education many bright women of her time were increasingly resenting, combined them with voracious and ‘unladylike’ outside reading.... She built a new poetic form from her fractured sense of being eternally on intellectual borders.... a ‘sheltered’ woman audaciously invented a new grammar grounded in humility and hesitation. HESITATE from the Latin, meaning to stick. Stammer.... He might pause, She hesitated. Sexual, racial, and geographical separation are at the heart of Definition.... if we concern ourselves with the deepest Reality, is this world of the imagination the same for men and women? What voice when we hesitate and are silent is moving to meet us? (21-22)

What voice, indeed? [Think too of the hesitations and repetitions built into a David Mamet play – the hesitations, in his hands, of men]. Who is this audience standing on (what Prendeville calls) such “uncertain ground” (58)? And what are our responsibilities?

Prendeville writes that, as we stand close to an Agnes Martin, “our instinctive focusing of attention, to discern something in the thing attended to, is in some way thwarted, or deflected....” There is no “resolution,” only an “overall ‘dissonance’” (65).  Yes, and this is the thing about our readings of Emily Dickinson; we all work to “resolve,” but as we do, we cram her poems into categories, as her first editors did (“flower” poems or “death” poems).  She wasn’t categorize-able, didn’t want to be pushed into the sewing corner. She was aiming at dissonance, too: I read “Beyond the dip of Bell” several times before I heard it as the stilled buoy or clapper.  This use of “dip” is the only time I can find it performing this function, a physical way of calling to our attention an auditory anomaly. There are easier ways to say what was said here. Her world was constricted. Her language and her form are not.

We have to take care. Prendeville ends by saying that “to be drawn close” to a Martin painting “is to apprehend her care in making the painting, and to assume the posture of care and affectionate concern oneself .... [her work] vindicates intimacy” (71).

A reader of Dickinson’s poetry must wander into it on her terms.  The poet’s brother, Austin Dickinson, the keeper of his sister’s purse, influenced one of the first sets of transcriptions of her poems. His mistress, Mabel Todd Lewis, copied out poems, making them available soon after the poet’s death, but she also inked over at least one entire poem 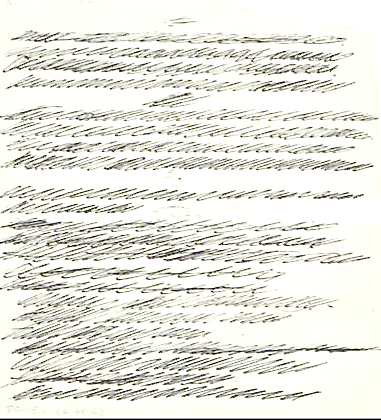 and omitted or cut out phrases or stanzas or sentences in poems or letters, all because Dickinson spoke too warmly of Austin Dickinson’s wife, Susan.  Was she assuming a romantic love? Was she just jealous of their friendship, she who had never met the poet? Or was she asserting her power?

We must not do any of these things. We cannot project, reject, cross-out or compartmentalize Emily Dickinson. because that has all already happened. We must start again. We must place ourselves before her handwriting and find her mark-making... and try and listen "Beyond the dip of Bell."

[Thanks to Brendan Prendeman, to Susan Howe, and to Amherst College. I have created a work on Dickinson, called "Missing Emily," for the Marin Museum of Contemporary Art's Altered Book and Book Arts Exhibition. Find your way there... and help Marin MOCA]. 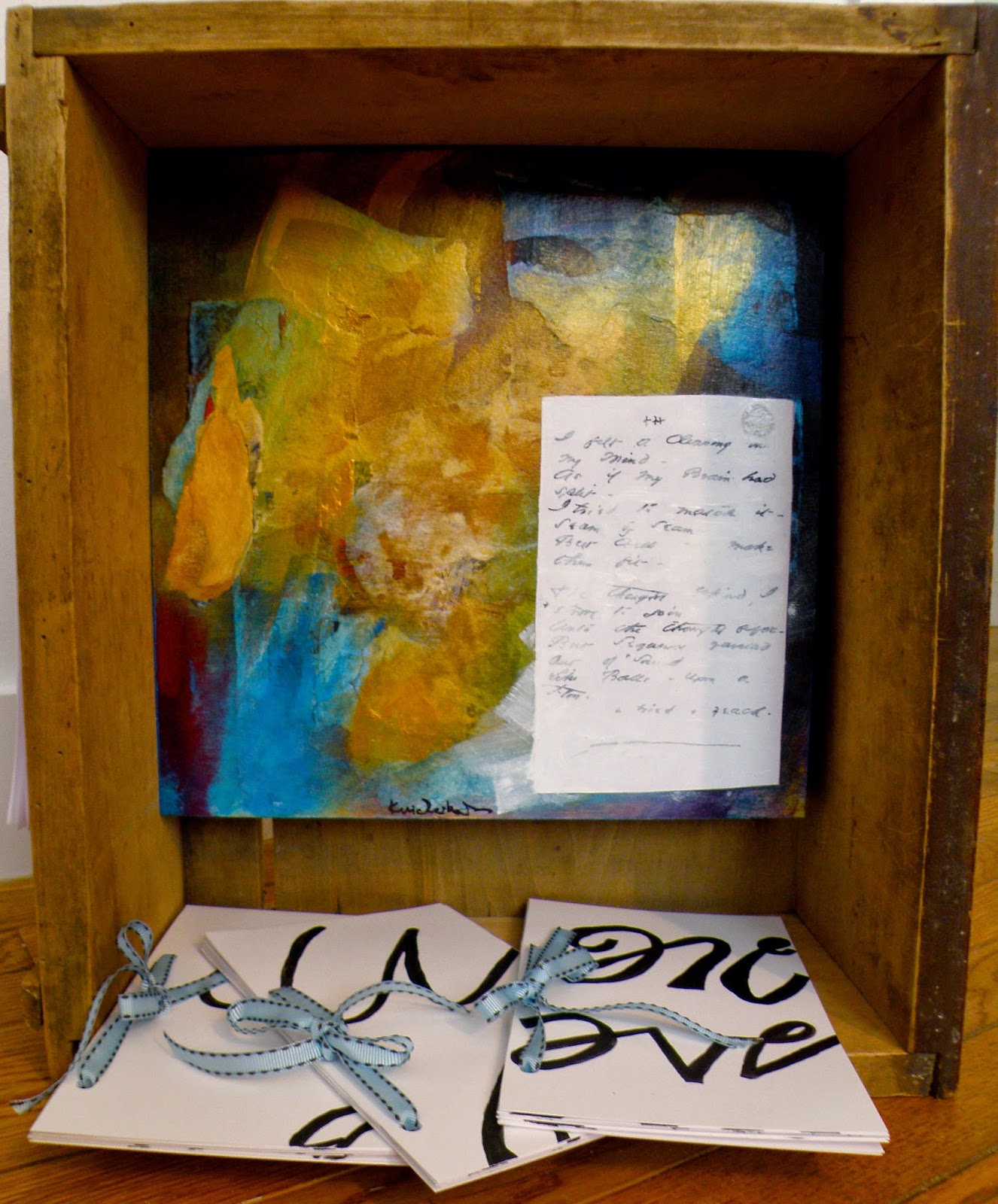