"Anything is a Mirror": "Vexed Endings" at Green on Red Gallery, Dublin, Ireland

We have moved to Dublin, Ireland, for three months of visiting (our daughter and her boyfriend live here) and to find a new perspective on art-making and viewing.

A compelling show to start: an exhibition of six artists called “Vexed Endings” at The Green On Red Gallery (a beautiful, bright loft space at 26-28 Lombard Street East, Dublin 2, through August 25th). The title implies that works are incomplete until … perhaps now, when the viewer sees them, or perhaps not entirely, ever: the gallery statement says that the works here “tend toward a material condition or conceptual state that is unstable, open-ended, and incomplete …. [the] process is not concluded and very much alive or ongoing …. The room for the viewer is ample and central.”

“Unstable, open-ended, and incomplete” like light through a window … it isn’t all the available light, we know that, but it’s the light we can see … and then it shifts.  The collected works of “Vexed Endings” change with the light and with the position of the viewer. They seem to me all about reflected light, which we don’t always notice.  It reminds me of the way light works in this Vermeer, “Woman Writing a Letter, with Her Maid,” which we saw at the National Gallery of Ireland (permission pending; see www.national gallery.ie for their photograph).

We can see the source of the light, the window, and the women’s bodies it touches; we can sense that the maid would far rather be out in the world (where she is looking) and that the woman writing seems totally caught up in her letter. Then we can see a folded and discarded letter, lit by that same sun, on the floor; perhaps that is the letter the woman is answering so intently. The upper half of the window appears to hold clearer glass, and the sun is high enough in the sky to concentrate mostly on that higher pane. Looking again, we see that the green drapes at the left margin are lit, too, so there is another window lighting them (probably the window depicted in Vermeer’s “Music Lesson”).  The light here is shown as a single moment and we can almost trace the line from the source of that light to the forms it lights.

The works in “Vexed Endings” intensify that line because they show it shifting; for these works, it isn’t just a single moment. The line changes for as long as the viewer is in the gallery.

A photograph, “Reflecting 1 (6th Generation)” by Philomene Pirecki illustrates this shift in light; the work isn’t framed, and hangs loose on the wall, leading me to photograph it from two different angles, front (where I am the black form at left) and the side: 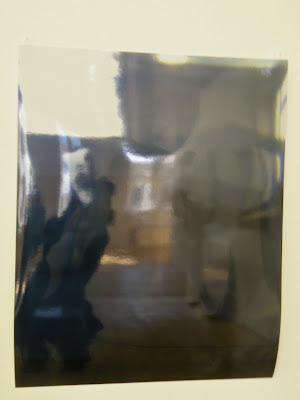 This is an abstract print (50.8 x 40.5 cm) that shifts, as you can see from these two pictures, depending on where we are in relation to it and to the light.  A second print of the same size, “Reflecting 3 (4th Generation)” appears to offer a little more certainty: 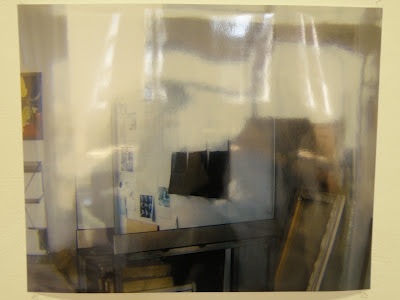 The artist’s studio, we think.  But each time we look, that line between the source of light and the object moves, and we are no longer certain what we are seeing.  This is, it seems to me, the essence of abstract work, that it forces us to see what we cannot actually know.  Pirecki is showing two paintings as well, but I was most intrigued by another work, “Equivalence (Copper, 3)” set on the floor that I photographed from above:

The thing itself, and its portrait. The lines of the floorboards are clearly reflected in the copper, and somewhat less clearly in the print; here, and not-here.

Dennis McNulty trained as an engineer and is a musician; his “Circuits”trails an electric wire across the floor to a digital reading that almost, but never quite, spells out the character for infinity:

The base of the piece is stacked concrete and the top, draped soft plastic, catches reflective light as it tries to create its own meaning, lit from within.  Another McNulty installation reflects light from the gallery windows and visitors and changes as we circle it. Here is my photograph of  “The time inside (the spoil)”:

The title seems to suggest the deliberate imperfections of the piece: the film twists away from the glass, as if trapped by heat or light.  I liked the way this piece brings the “outside” in.

My favorite two pieces from this show are the pair of etchings, “For Now 1” and “For Now 2,” by John Graham: 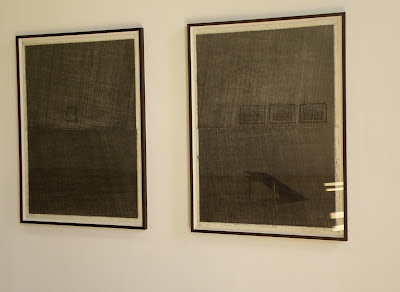 The lines have been slowly and carefully crossed, then printed, black lines against a white surface (referring back to Agnes Martin) and as we look we can see the gallery reflected: 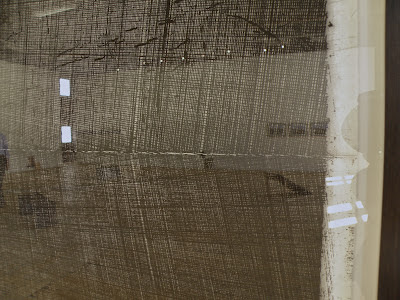 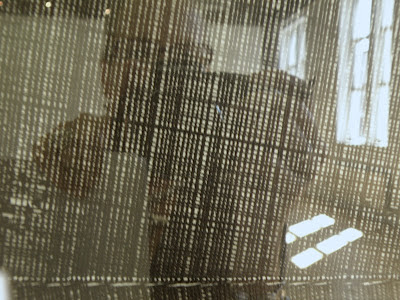 The lines weave in and out, gaining volume, almost becoming three-dimensional fabric.  The two prints are very similar, but the artist stresses that they are not the same; there are delicate lines across the top of the horizontal and vertical patterns so that the light is not caught in quite the same way in each form.  I kept coming back to these two; they have a calm and contented presence.

It’s John Graham’s fault that I am reminded of Agnes Martin, who wrote “Anything is a mirror…. There are two endless directions. In and out.”

Thanks to Jerome O Drisceoil for his help! Go and see the show if you are in Dublin (there are many more fine works that I didn't get to here) and see for yourself the “In and out.”