"The Hole Between Art and Life": Robert Rauschenberg Unpacked

A very young Robert Rauschenberg is perched high on a ladder in front of a cathedral-style arched window, answering questions (undated video, link posted at http://judys-journal.blogspot.com).  We hardly hear the interviewer.  Rauschenberg seems totally relaxed, and really interested in describing his painterly approaches as accurately as possible.

Let’s begin with his combine painting, “Rebus” (from 1955, now at MOMA; photo below by Suzanne DeChillo for The New York Times): 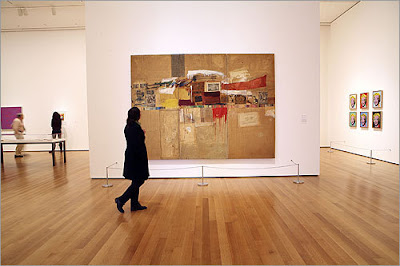 Rauschenberg began with “a ground of newspapers … the funnies …. I had an already-going surface, so there wouldn’t be a beginning to the picture.”  Now this is a very interesting admission.  The blank canvas can be daunting, so I really like the idea of starting, as Rauschenberg says, “an already-going surface.” (Rauschenberg is usually pretty articulate, so the awkward structure of his phrase, “already-going,” seems particularly telling –- it was deeply felt). Robert Motherwell had said that he started paintings by making some kind of painted “gesture” on the canvas, and then, he said, he would have a problem to solve.  Rauschenberg did not identify with Abstract Expressionists like Motherwell, but he says, in this video, that what he did take away from their “passion” was the fact that “they let their brushstrokes show.”  But he also, tellingly, begins with a “gesture.”  For Motherwell it was a sweeping brushstroke, for Rauschenberg it was “the funnies,” but the need for a prompt is the same.  We all need to start somewhere.

After he confirms that “there wouldn’t be a beginning to the picture,” because the funny papers had given him a starting point, he says this very strange thing:  “And so it [would] all just be additive …. It doesn’t matter what’s inside.”  I see what he means about the idea of “additive,” that, given the newspaper ground, he just starts adding more collage or paint or inks or wood.  But then what does he mean by “It doesn’t matter what’s inside”?  “Inside” of what?  He doesn’t mean inside his own mind (because that does matter) or inside his plan for a painting (because there isn’t one).  I think he means that it doesn’t matter what the bottom layer consists of, because it is “inside” the finished combine.  It may peek through, but it is merely the starting point, and it is the accumulation of stages that is important.

Rauschenberg continues, “it’s like when it stops because you’re dealing with an object, what it can make you think of how it could continue.  You begin with the possibilities of the materials and then you let them do what they can do.”  Again, the language is rolling out and he’s not policing it.

I am going to take some liberties here to try and see what he is really saying.  Rauschenberg certainly never re-presented any objects in his work. He collaged photographs of a Titian nude, or a rocket, or a street scene, but he never described an object on a canvas with his own hand.  What he explains to us, here, is why.  The flow of working “stops” for him when he thinks about “dealing with an object” on its own.  If he were, say, to try and work on a single “object,” the way Manet has with his 1882 painting, “Flowers in a Crystal Vase”: 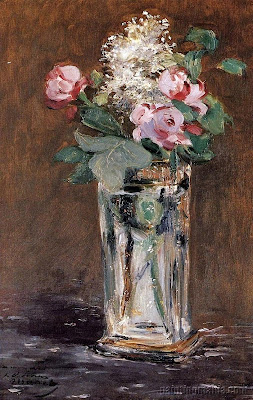 … it would all stop.  The initial gesture, the idea of adding elements to the combine or painting, the flow of work would all be compromised, because of the necessity of getting the vase and the water and the petals just so.  And so there can’t be a hand-painted, technically-perfect, light-and-shadows-following-the-curve object for him.  When you land on an object, it lands you.

And I know exactly what he means (assuming this is what he means).  When I was painting my odalisque series, I was so worried about getting the outlines, getting the form, getting the whiteness down right, as here, with “RIVER: Anonymous Odalisque Reclines with Pillows” (3’ x 3’): 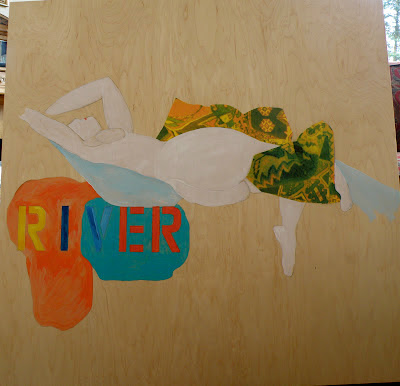 And I did love these paintings, but somehow the need to paint them stopped.  I thought of them as exercises in freeing the odalisques, seeing them outside in a new context, a beach, a riverbank.  But somehow they weren’t similarly freeing for me.  And then my son said (not unkindly, but trying to help me see why it wasn’t working for me anymore) “Well, there you are. A woman stuck on wood.”  And then I got it.  That’s exactly right.  The object “stops” the artist in his or her tracks.  And that’s what Rauschenberg is saying.

We can’t, any of us, anymore, draw a vase filled with flowers, the object re-pictured in its precise entirety on canvas.  We can’t make the flowers out of wax and armatures.  But you can nail a flower to 2 x 4.  Early on in the video, Rauschenberg gives us what may be his most important piece of advice:  “You have to work in the hole between life and art,” he says, because “you can’t make either.”