The Baltimore Museum of Art (BMA) is set in its own majestic portico’d place, augmented with a sweeping addition. It seems very far away from the city, and to travel there is to be (somehow) in art. BMA presents the “Matisse-Diebenkorn” through January 29, 2017 and then, after a re-hanging, the show opens again at SFMOMA in the spring.

What would these two artists say to one another across time? We know that Matisse went all the way to the edge of abstraction and just peered over with great delicacy, (with “View of Notre Dame” in 1914, for example): 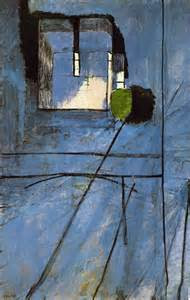 and then retreated a few inches.  Diebenkorn set up shop just past his predecessor, but would make use of Matisse’s floral grillwork for safety’s sake.  You’ll see.

Pretty much everyone can picture a Matisse. Close your eyes. Okay? Got one? 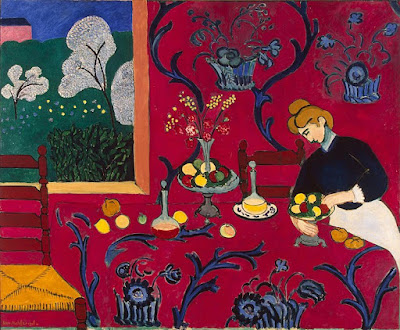 But not everyone can pull a Richard Diebenkorn image out of thin air.  And if you could, what period would you choose? Abstract? Figurative? or Ocean Park? Maybe, after seeing the show at BMA or SFMOMA, it would be this one, “Recollections of a Visit to Leningrad,” 1965, which is Matissean but also Diebenkornish: 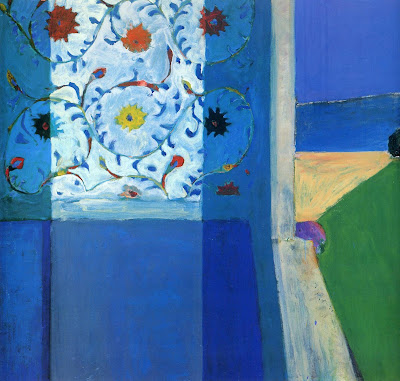 To Begin with Diebenkorn
Let’s start by thinking about the “new” guy. I had seen a massive Diebenkorn exhibition at the Royal Academy (RA) in London in the spring of 2015.*  The Royal Academy offered generous texts on their walls and a thorough introduction to the artist on their site. Here is an example:
(www.royalacademy.org.uk/article/richard-diebenkorn-inside-the-show).

To weigh Diebenkorn’s reception in England, so Paul Carey-Kent, a financial policy analyst and art critic, brought 6  “well-established painters” to the RA’s Diebenkorn show, and recorded their comments along with his own. Carey-Kent started with the assumption that Diebenkorn is “a painter’s painter.” Half of his guests were pleased with the art on view, half were not. The painters are: Katrina Blamin, Claudia Carr, Christina Niederberger, Michael Stubbs, D.J. Simpson and Dolly Tompsett ; see the article for details (www.artcritical.com/2015/05/04/paul-carey-kent-richard-diebenkorn).

In the article, Michael Stubbs observes that Diebenkorn’s abstract work of the 1950’s was “typical of the early ‘50’s, in developing a Cubist space into more fluid forms which value spontaneous gestures, and which simultaneously construct and contradict the space.” YES. Diebenkorn faced into everything, right up through Cubism and Abstract Expressionism, and found his own voice. This is what makes him a “painter’s painter”: we can see him struggle, almost watch him think. Diebenkorn reveals everything beautiful and unsightly, brushstrokes that lesser artists would worry about exposing. Here is a detail from “Ocean Park 43” (Royal Academy of Arts exhibition catalogue, 14 March-17 June, 2015, p. 140): 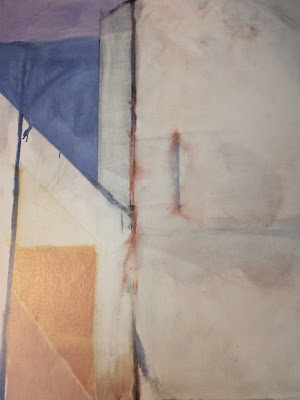 Look at the escaped blue squiggle, up against a deliberate long dripped line. Now take another look at the gray line that anchors the blue triangle: there is another shape partly visible inside that. There are no straight lines on either top or bottom of the purple stripe; the artist didn’t auto-correct. The green drip slams into an orange line that then veers off to nothing, allowing the green to re-appear. This is not the work of a minute. This apparent spontaneity is earned through time and incredible patience on the part of the artist.  Marking, erasure, marking, stopping.

Another of the artists brought to the RA exhibition, D.J. Simpson, uses an electric router to mark/draw onto his wood support, and then paints in the backgrounds to make his art (his art is “fetishising,” says the artist and critic John Chilver). Simpson thinks that Diebenkorn knew exactly “when there was enough push and not enough pull.”  I think that, by “push” Simpson means the sustained agitation in the painting, flowing and just a bit untethered. Here is the question... Does Simpson mean that Diebenkorn would then add in the “pull” to lock in the work? Or does he mean that Diebenkorn would allow the painting to remain un-resolved, that this state of flux was the goal?

Matisse and Diebenkorn
The RA ‘s Diebenkorn show was big and beautiful. But it was a show that crested with the Ocean Park series, as if all the previous work was only preparatory.  The hanging was rather convincing as a yellow brick road, and it left me very little room to breathe. In this context, I saw the 1950’s work as flawed, and left feeling odd. I should have liked it; Diebenkorn is a painter’s painter, and, even more, an abstract painter’s painter.

So I was really eager to see the Matisse-Diebenkorn show.  Would Diebenkorn flounder in the face of the older man’s work? I had expected, because I have always loved him, to gravitate to the Matisses.  A brief aside: here is a lovely Matisse, (not at the show at BMA), called “Entrance to the Casbah,” (1912/3): 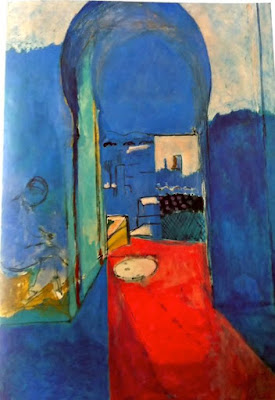 Years ago, I had gone to a Matisse show** and loved many paintings with this intense blue-dominated palette and come home immersed in what I thought of “Matisse blue.”  Bonnard said of a Matisse on his walls that

By day it is the blue that takes the lead. What an intense life the colors have, and how they vary with the light!  (1946)

But I was wrong. It was black, deep and abiding black. (Black is so important that one artist has recently claimed exclusive rights to the newest, strongest black mixture, Vantablack  (http://hyperallergic.com/279243/anish-kapoor-gets-exclusive-rights-to-the-worlds-darkest-pigment).
But I get ahead of myself.  I should start with the observation that the wall texts and the essays for this show are entirely convincing. The research is solid, the relationship clear. Diebenkorn studied Matisse beginning with his days at Stanford. He saw Matisse’s paintings in the home of Sarah Stein. He visited MOMA in New York and the Pompidou in Paris. Diebenkorn owned forty-one books on Matisse, even loaning one to MOMA’s curator John Elderfield in 1983 to help with an upcoming exhibition. Diebenkorn saw little-known Matisse paintings as a guest of the Soviet Artists’ Union (Matisse/Diebenkorn catalogue, eds. Janet Bishop and Katherine Rothkopf, BMA and SFMOMA, 2016).

Near the show’s entrance, I found myself moving back and forth, looking at Matisse’s “Studio, Quai Saint-Michel”: 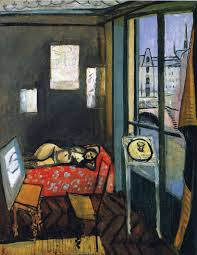 And his “Goldfish and Palette”: 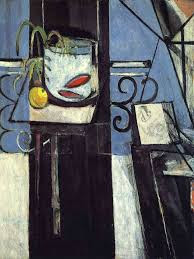 And then, with those two firmly in mind, I took in “Urbana 2” 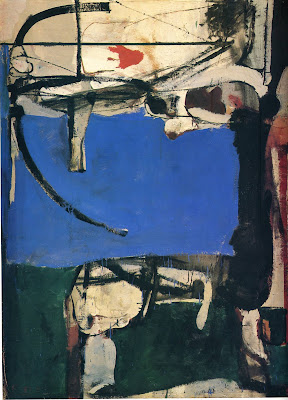 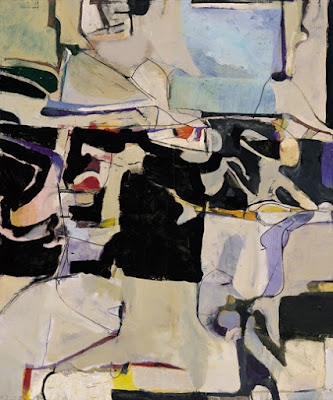 And basically didn’t want to move on. (So I will basically stay here for this writing, but know that there are many, many more works in the show and go see it!). The irony of the day was that the two Diebenkorn paintings had both been in the RA show, but I obviously hadn’t SEEN them.  I saw them now. And they blew me away. I remember thinking about each one, “is it a room? a landscape? a state of mind?”  The “Urbana” series was all that abstract paintings are meant to be. They were open, un-resolvable, but there might be a key, if I stood there long enough, maybe... I wanted to stay in front of them forever. And what held me in was the black pigment. Look back at “Urbana 6” and imagine just the black in outline as I drew it in my sketchbook: 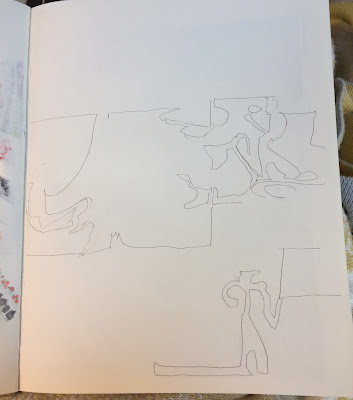 The shapes are powerful, even in outline, but here they are again in black: 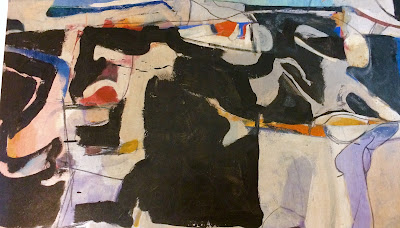 The black paint won’t give it up.  It hangs there, receding and coming forward as if it were actually moving. Curator Janet Bishop writes about “Studio, Quai Saint-Michel” and “Urbana #4” that

... the young painter appears to have repurposed the blocks of color that make up the Parisian studio interior to create a composition seemingly devoid of familiar points of reference (catalogue, p. 23)

This is the goal. The “pull,” Mr. Simpson, is left up to the viewer.

It is as if Matisse lived long enough to move a little closer to that abstract edge; Diebenkorn completes Matisse’s line of thought, taking the loose shutter of  “French Window at Collioure” (which, curator Katherine Rothkopf writes, was changed by Matisse to cover over  ‘a balcony and a landscape in the distance” were covered over by “a wash of black paint” [!!] (catalogue, p. 123) : 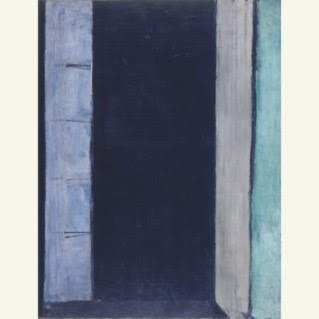 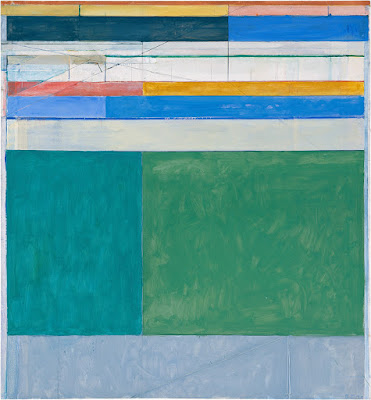 *My husband, Charles Tarlton, wrote a series of ekphrastic tanka prose about the Ocean Park paintings, based on our visit; see artistinanaframe.blogspot.com, the entry on Diebenkorn from 11/21/16; there is a drama in prose & poetry on the relationship of Matisse and Picasso printed there as well.