When we look at a Francis Bacon painting, such as "Screaming Pope" (the affectionate term for his "Study After Velazquez's Portrait of Pope Innocent X" from 1953, among others, one of which is in the art collection at the Vatican), we see a figure moving, in vertical lines of repetitions of itself, in agony or ecstasy or a frenzied combination of both. Bacon seemed to see the person in his paintings, the figure, as the only element requiring movement, considerable movement, generally more approaching an agony than an ecstasy. He kept and annotated and ripped and tore and re-configured photographs that could inspire his work. The source photographs that survived him are barely-there, as in this photograph of his then-lover, George Dyer: 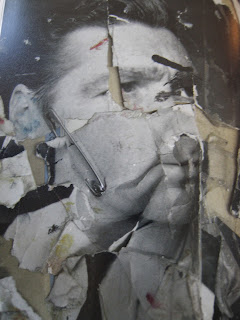 This is from the book Francis Bacon: A Terrible Beauty, a show curated at the Hugh Lane Gallery in Dublin by Barbara Dawson and Martin Harrison. It becomes a very different thing than a photograph ... it is already tormented, "changed utterly," as Yeats wrote.  Bacon's portraits, diptychs, triptychs all reflect this concern to show the body as moved from both within and without, as in this (unfinished?) Untitled (Self-Portrait) of Bacon from 1991-1992, from the same book: 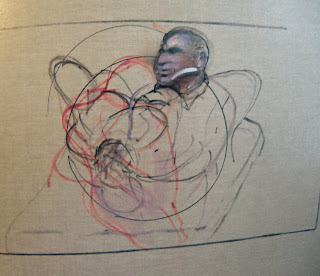 Look at the lines. There is a frantic, circular repetition to this sketch. The face is pretty intact, but the feeling that this piece conjures up, at least for me, is changing, busy, unsettled, anxious... Bacon chooses to let the figure move against a flat ground ... not just here, but most of the time.

So I ask myself, what if it were the other way around? What if the figure were still, and the ground moving? Because, as we move through the air, the air appears to move... we think of ourselves as intact. The struggles tend to remain inside. Bacon exposes them. But what if the air responded, instead? What if the surroundings were the sopurce of energy for the painting, and what was "background" comes to the "foreground"? Take the comparison of Rubens and Picasso from a few posts back (April 26) and block out the figures from each... what survives here? 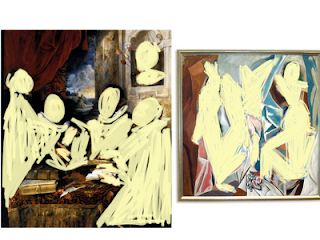 In the Rubens, the lovely view out of the curtained window. it still seems to calm and distant, too much a reminder of its former status as... filler? In the Picasso, a great deal stays with us. Look at the energy of his "ground" as it becomes figural, here... look at the lovely slices of blue, nearly vibrating... The whited-out Demoiselles are pretty angular and bold, but they fight, now, for space and for the sense of movement offered by those slices of sky and curtain. He could have gone abstract. It was always an option.
at May 19, 2011