Gertrude Stein says "It is not clarity that is desirable but force.

Stein is writing about, first, "clarity," by which she means, for instance, approaching writing a novel with the outline done, then writing with the trail for the reader well-lit and the ending clear. No matter how magnificent the writing is, or what points the writer may have intended to make, this kind of writing is, ultimately, forgettable, "nobody listens." It is, as Richard Foreman would say years later, the kind of art that puts readers or viewers to sleep, because they know what will happen (see my post from May 4, "find the heretofore un-mapped"). But, second, Stein writes about the kind of writing that she wishes to do, and does, (unless she is overwhelmed by audience... see my post from April 7, "artist, audience, performance").  This second kind of writing comes of "vitality" (and is met, she suggests, with "vitality" from the reader) because you know what you mean. That is, the expression comes from somewhere inside you, as you write, and, like Hemingway's "truest" writing, cannot be prescribed, pre-planned, does not describe, but keeps the writer, and the reader, in the present moment of reading. This is why it can be so important for us to hear Stein's work being read... because the sounds keep the reader feeling that she "mean[s] what" she "know[s]."  The reader is not, then, de-coding Stein, but walking, as my poetry Professor Robert Weisberg said once about reading T.S. Eliot, around the poem [or the prose] as if it were a sculpture.  Stein wants you to walk around the words, hearing them, staying awake, and be "as near as anybody can come to understanding any one." Which is, after all, at least part of the point....

The reason I am interested in the "force" of Stein's writing today is... a new exhibit at the San Francisco Contemporary Jewish Museum, called "Seeing Gertrude Stein: Five Stories." The show features Stein in her own world, the one of her own making, and it begins with Stein reading from her work "Picasso." It starts with her voice.  And then it proceeds to her writing, her friends, to Alice B. Toklas, the life they created together in Paris and the countryside, and brings together art-work, first editions, photographs and videos that have never shared the same space. There is a wonderful photo of Stein in a Balmain velvet suit at his fashion show, and another one of Stein and Toklas, about 3 years into their relationship, tanned and laughing and dressed in matching flowered dresses. Go. See it. There will also be a show at SFMOMA opening later this week about the Steins....

Years ago, we went to see Stein's house in Bilignin. At the time, it was lived in, and the residents were not willing to take us indoors, but we did walk along the terraces, and see the views and the gardens. It was beautiful.  Afterwards, we drove down to the road below and took a photo of the house (below) and remembered what we had read, once, about the way residents of the town loved her and sheltered her in World War II: one of them said "credit for her until hell freezes over." 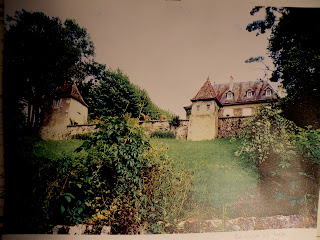